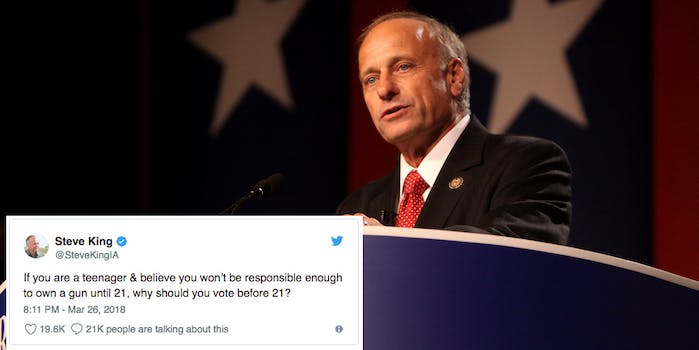 This is a lazy correlation.

Rep. Steve King (R-Iowa) is one of the more bombastic and vitriolic members of Congress, with a history of pushing the envelope on what race-baiting things one can say while still serving in the federal government. So naturally, when he does a bad tweet, people love to dunk on it and him.

If you are a teenager & believe you won’t be responsible enough to own a gun until 21, why should you vote before 21?

To debunk King’s correlation: Teenagers don’t believe that they, specifically, are too irresponsible to own a gun, they simply believe that if every teenager was restricted from owning a gun it would create a safer society.

Which is something the U.S. already did with handguns.

Also, that owning a gun, and having a say in the whole host of matters relating to the society you live in, are two different things.

If you are almost 70, and believe in magical vaginas that shut down the reproductive system when they detect rape, you shouldn't be allowed to have a gun, vote, drink, be in congress or reproduce. https://t.co/kYCMCo4lMX

Teen brain development makes them more prone to impulsive decisions, but they're just as capable of longterm reasoning as older adults are: https://t.co/x7MRuSqmlU (In other words, they're quite capable of weighing the pros and cons of voting you out!) https://t.co/g7lDp11g97