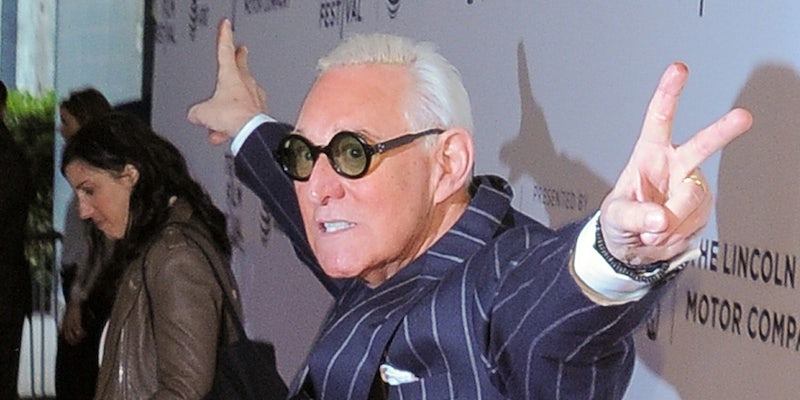 Special counsel zeroes in on Roger Stone over WikiLeaks ties

Stone's connections to WikiLeaks have come under scrutiny

Special counsel Robert Mueller has zeroed in on Roger Stone’s relationship with WikiLeaks and for his potential role in influencing the 2016 election, according to the Washington Post.

Stone, a GOP strategist and Trump ally, wrote a series of tweets around the election hinting at his relationship with WikiLeaks. The transparency organization leaked hundreds of thousands of emails related to the Clinton campaign, which likely came from Russian operatives.

The special counsel’s office is exploring whether or not Stone had advance knowledge of the WikiLeaks dumps, which were intended to derail Clinton’s presidential aspirations.

Stone has said that he did not know about the emails before they were made public, but he’s also made several statements that could indicate that he did. Stone repeatedly bragged about being in touch with WikiLeaks founder Julian Assange in the lead up to the election, although he has since said that those statements were misinterpreted and their significance overblown.

However, Stone had multiple private conversations indicating that he did, in fact, have a back channel to Assange, said Stone’s former friend Randy Credico, a New York City comedian.

Another potential backchannel is through conspiracy theorist Jerome Corsi, with whom both Stone and Trump are close. Corsi helped popularized the birther movement in the U.S. with a book called Where’s the Birth Certificate?: The Case that Barack Obama is not Eligible to be President. According to the Post, the grand jury has interviewed Corsi, and the FBI is attempting to talk to his close associates.

Stone was in touch with the Twitter account of Guccifer 2.0, the hacker entity that leaked the Clinton campaign’s emails to WikiLeaks and who is now understood to be a front for Russian military intelligence. Stone claims the messages don’t prove malicious activity or intent.

Further scrutiny of Stone’s tweets exposes cryptic messaging seemingly related to the leaks. On Aug. 21, 2016, Stone tweeted, “Trust me, it will soon the Podesta’s time in the barrel. #CrookedHillary.” Podesta’s emails would be leaked just six weeks later.

In mid-September of that year, Stone said that he anticipated WikiLeaks would “drop a payload of new documents on a weekly basis fairly soon. And that of course will answer the question of exactly what was erased on that email server.” In that same interview, with Boston Herald Radio, Stone said, “I am in touch with him through an intermediary.” Two weeks later, Stone tweeted, “Wednesday @HillaryClinton is done. #Wikileaks.”

While there was no leak that Wednesday, Oct.5, Stone did tweet, “Libs thinking Assange will stand down are wishful thinking. Payload coming #Lockthemup.”

Two days later, WikiLeaks started publishing Podesta’s emails in a steady stream that would continue almost daily in the lead up to the election.

Stone called the Washington Post’s piece “one of the shoddiest pieces of reporting that I have seen my 40 years in American Politics,” according to a statement provided to the Hill. Stone further said that his only connections to WikiLeaks were through third-party sources.