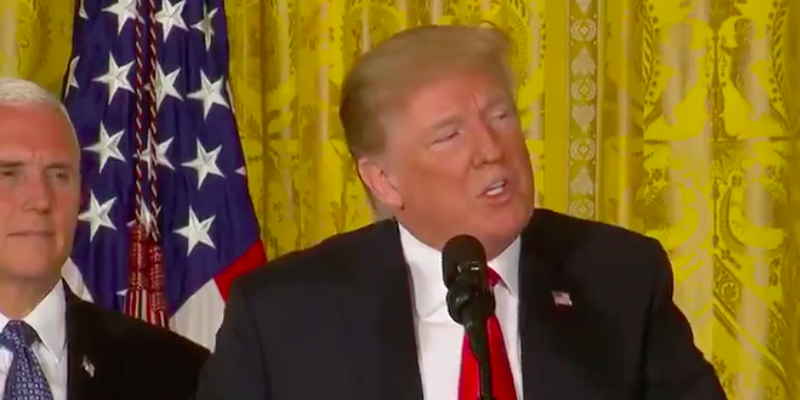 Trump announces a space army that won’t ever happen

What is it? You don’t need to know! When’s it going to happen? Never! How will it affect you? It won’t!

Then why are you reading this? That gets to the heart of an existential question about how the president is covered by the media. If he makes an outlandish statement with no grounding in reality and no likelihood of ever happening, is it important for that information to be passed along to every American as heedlessly and breathlessly as possible?

What if the name is kinda funny?

Today, the president announced the creation of a “space force.”

This is not a thing the president can do, really, but who cares? Here’s the president’s logic, announced at a meeting of the National Space Council: “Very importantly, I’m hereby directing the Department of Defense and Pentagon to immediately begin the process necessary to establish a Space Force as the sixth branch of the armed forces.”

Here’s the rest of the statement.

While the president can’t tell the Pentagon to do things, it’s somewhat hard to accomplish them without money, which Congress would need to provide. Some have already said they wouldn’t do that.

The president told a US general to create a new Space Force as 6th branch of military today, which generals tell me they don’t want. Thankfully the president can’t do it without Congress because now is NOT the time to rip the Air Force apart. Too many important missions at stake. https://t.co/uYzqg1W8nE

All that’s left is to read some tweets. Some of them are funny!

The thing to understand about the Space Force is that every one of you, including the ones who just heard about it right now, have put in more thought about it than the president did.

WIRED: Let's create a "SPACE FORCE!" so we can conquer Mars pic.twitter.com/wfPfbeioh1

#SpaceForce is a distraction from what the Trump administration & the rest of the @GOP is doing to kids at the border.

For no reason, here is 2 minutes of Trump saying “Space Force” set to the time of The Tornados’ classic space song “Telstar” pic.twitter.com/2YEiWUoUtD