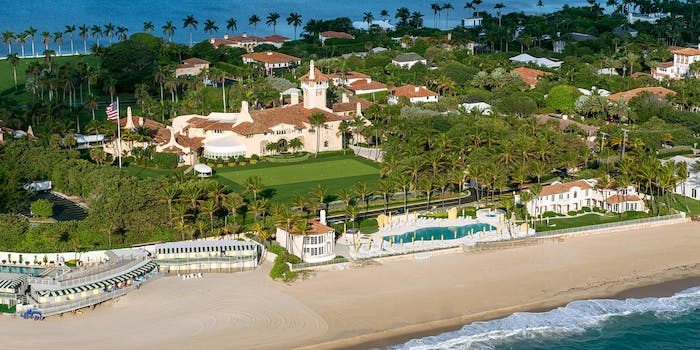 People on Twitter loved the symbolism of the sinkhole forming.

The cause of the sinkhole forming is unclear. However, the town of Palm Beach said the sinkhole is four-feet-by-four-feet in size and “appears to be in the vicinity of a newly installed water main.”

The area has been secured, Palm Beach said in an alert, and workers are expected to perform “exploratory excavation” on Monday.

Trump also was received a security briefing on North Korea’s launch of a ballistic missile in plain sight of guests at the resort in February.

Mar-a-Lago closes for the season in May, and Trump is expected to spend more time at his golf course in Bedminster, New Jersey.

People on Twitter saw symbolism in the sinkhole forming so close to President Trump’s property amid a flurry of controversy engulfing his administration. Some people thought it may have a connection to the recent incident with an orb in Saudi Arabia.

a sinkhole has opened up in front of mar-a-lago, proving that someone, somewhere, has a great sense of humor

16 square-foot sinkhole has opened up directly outside Mar-a-Lago https://t.co/JJ0VT3kqPa https://t.co/Has4HGdrKa

President Trump is currently on a nine-day Trip abroad. He visited Saudi Arabia over the weekend and is in Israel Monday and Tuesday before embarking to Vatican City, Brussels, and Sicily.