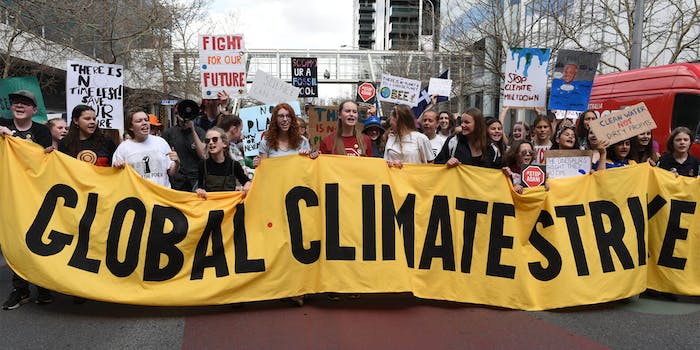 Parents, grandparents, and adults of all ages join kids in demanding climate justice.

The movement, started by Swedish teenager Greta Thunberg, involves teenagers striking from school on Fridays in an attempt to get the world’s governments to address the climate crisis and start transitioning to a zero-emissions future.

This time, though, they’re asking adults to strike with them as well, calling on those not already participating to stop working for half-hour as a sign of solidarity.

Let’s demand an end to the age of fossil fuels and usher in a new age of natural Solutions and climate justice for everyone. No matter where you are in the world, here are some simple ways you can get involved with a #climatestrike near you. #globalclimatestrike pic.twitter.com/KyiYft9mu2

This protest will last a week and has already started strong with people of all ages flooding the streets today.

Protesters have poured out in cities like London and Nairobi, as well as others across the globe.

From Melbourne to Nairobi, London to New Delhi.

People fill the streets around the world in the global #climatestrike. pic.twitter.com/6A5S4wtC9f

Australians are hitting the streets in large numbers as the world gets ready for the global #ClimateStrike. #SchoolStrike4Climatehttps://t.co/AVdxv4DhkO

The Lahore #ClimateMarch at Al Hamra.
A Sea of Youngsters protesting for their Future#ClimateStrike@ClimateActionPk pic.twitter.com/RhUswkivut

This #ClimateStrike photo is incredible.

We know that people power makes a massive difference to the reality of decarbonisation – which needs bigger, louder, broader public pressure. But this is way bigger than I expected. #schoolstrike4climate pic.twitter.com/jd7EL3sGPx

Students and their teachers are making their presence felt.

Good on ya, Cambridge, where right now a lot of very clever people are getting the world's most important lessons from school kids. 👊#ClimateStrike #schoolstrike4climate pic.twitter.com/bVgOun6hqx

“If you were smarter we’d be in school” – my favourite so far #climatestrike #schoolstrike4climate #auspol pic.twitter.com/5XBYNAJzaj

Parents and grandparents are out as well, marching for their children’s future.

Here with my 88 year old Grandma, Mum @janecaro and my Dad (taking the picture). I will be able to look my babies in the face this arvo and tell them that people all around the world are fighting for them. Thank you, all. #SchoolStrikeForClimate #schoolstrike4climate pic.twitter.com/B7AfTJZmcZ

As requested, professionals came out of their offices to throw their weight behind the teens.

Brazilian metal workers on strike. Great to see the trade unions out in force #ClimateStrike https://t.co/1UMj7KxPRK

Musicians played in honor of the strike.

Protestors wore elaborate costumes and carried eye-catching signs, trying to bring as much attention to the crisis as possible.

This is the sound of protest!

Sound and Music stands in solidarity with the next generation at today's #ClimateStrike – let's listen to the planet 👂🌍#GlobalClimateStrike#schoolstrike4climate pic.twitter.com/qZzxBo7E2Q

This may be the first #ClimateStrike in #Perth #Scotland 🍃😊we can make so many positive changes, let’s do it 🌼 best wishes from #Scotland #ClimateCrisis #ClimateEmergency #Strike4Climate #schoolstrike4climate @Strike4Youth @GretaThunberg @ExtinctionR #environment #climate pic.twitter.com/BaPYQ3s8bn

I was moved when I saw these girls & their sign.A snarky kid behind me said, 'They're just trying to go viral…' Well here they are either way #ClimateStrike #ClimateChange #ClimateAction #GretaThunberg #ourfuture #schoolstrike4climate #SaveOurPlanet pic.twitter.com/Oa9MZZ03gu

This week, in advance of the strikes, Thunberg testified before Congress, calling on U.S. leaders to “listen to the scientists,” a message these protesters are hoping to amplify.