When President Obama ascends the stage to speak at the Democratic National Convention in Charlotte, N.C., tonight, it’s pretty much guaranteed he’ll take over Twitter. You just won’t be able to escape the social network’s obsession with the speech, the man, and the presidential race.

Obama’s name will be everywhere.

There’s one person who mentions President Obama more than anyone else, however. One user whose dogged determination goes unmatched among the social network’s 500 million users.

Who is it? A Twitter-happy Tea Party patriot? A bored Occupy Wall Street kid with nowhere to occupy? Mitt Romney’s alternate account?

Meet sazare, a 30-something (we think) Japanese woman who, despite barely speaking English, has launched a relentless campaign of mass spam at the official Barack Obama Twitter account.

According to data from Indiana University’s Truthy project, which tracks Twitter chatter about popular memes and people, no one tweets to President Obama more than sazare. (Truthy’s data comes from a random sampling of tweets provided by Twitter’s API over a three month period, a representative told the Daily Dot.)

So what’s sazare want the president to know?

Sazare thinks it will be terrible for everyone involved, and damn it if she isn’t working hard to make you notice.

There’s something oddly inspirational about sazare’s relentless spam. She posts variations of the same messages—in Japanese—over and over to the @BarackObama account. She must know it’s unlikely the U.S. president, thousands of miles away will notice. But she keeps posting. And posting. And posting. 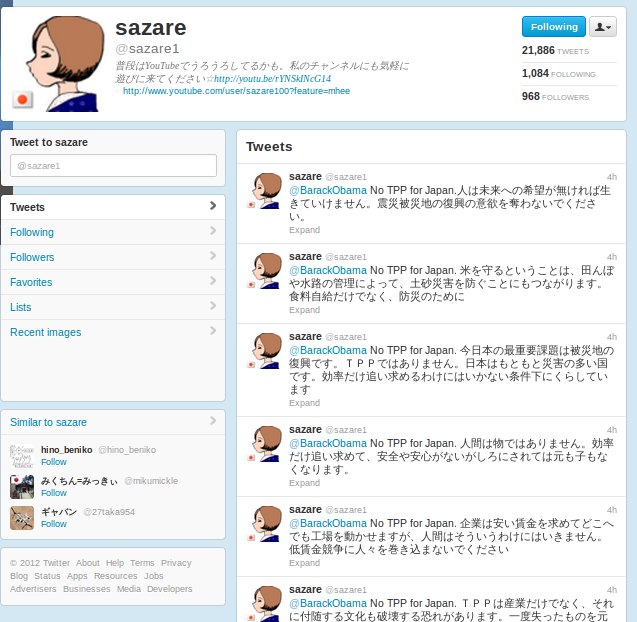 If you’ve never heard of the trade agreement—usually shortened to TPP—don’t feel bad. Major media outlets are so focused on the daily shenanigans of election-year politics that news about the agreement has received cursory coverage at best. But sazare has good reason to be so obsessed with it: It is one of the biggest stories of the year. It will affect billions of people.

The secretive pact would forge a gigantic free-trade sphere join the U.S., Canada, and Mexico with Australia, Malaysia, and Singapore and, according to the Wall Street Journal, would “eventually encompass about one-third of the world economy.” Many in Japan oppose the agreement because they fear lower tariffs would harm Japanese manufacturing and agriculture.

I asked sazare what she personally found so objectionable about TPP. She replied: “It is designed to enrich the rich limited” (by which we’re guessing she meant “exclusively”) and referred me to a YouTube playlist including this video from left-leaning news site The Real News:

Sazare’s main goal is just to make people aware of the agreement, as she told me on Twitter.

Japan is in the midst of its own hot election season, and its Prime Minister, Yoshihiko Noda, perhaps bowing to electoral pressure, has already declared his government won’t take part in the talks.The 14th round of negotiations will be held from Sept. 6 to 15 in Leesburg, Va.—one state away from where Obama speaks tonight.

Millions of people will watch that speech. Will anyone listen to sazare?