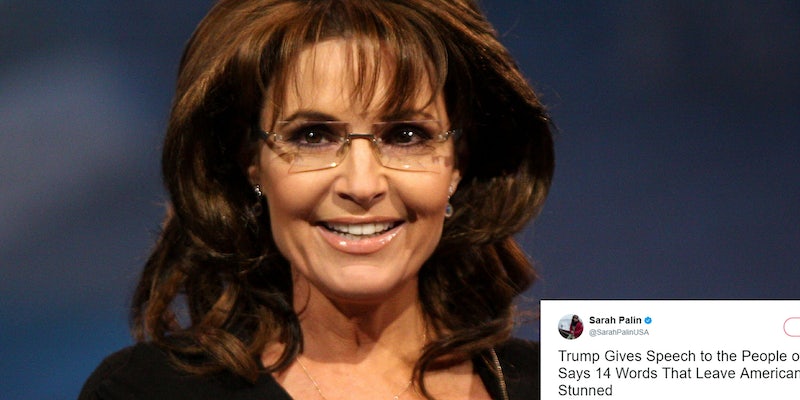 Sarah Palin may not know that the phrase is considered hate speech.

On Thursday, Donald Trump addressed the Polish people in a speech in Warsaw that many back home in America felt was dripping with alt-right undertones and dog whistles for white supremacy.

THE WEST WILL NEVER BE BROKEN. Our values will PREVAIL. Our people will THRIVE and our civilization will TRIUMPH! pic.twitter.com/sozuVgdp5T

Today, former Alaska Gov. Sarah Palin, in a tweet about the speech, may have inadvertently brought a popular phrase well-known to white supremacists into the discussion.

The article Palin links to is an analysis of the speech by Young Conservatives, where the headline is “While Overseas Trump Hails Populist Poland, Declares West Must ‘Defend Civilization’ and ‘Faith.’” However, the title that auto-populates when you post it on social media is, “Trump Gives Speech to the People of Poland, Says 14 Words That Leave Americans Stunned.”

“14 Words” is a phrase often used to reference white supremacist David Lane’s statement that read, “We must secure the existence of our people and a future for white children.” The Anti-Defamation League considers it hate speech.

However, it was unclear from the original article which 14 words the author of the social media headline was referencing. The publication later updated its story to make that reference explicit. In a statement emailed to the Daily Dot and the Daily Beast, Young Conservatives CEO Josh Riddle said their use of “14 words” referenced a part of Trump’s speech, not the infamous Lane quote:

This is the 14-word quote the social media post is referencing: “Let us all fight like the Poles. For family, freedom, for country, for God.”

About 2 minutes of research would have revealed how there is a long history of our site (and countless others) using word counts in social media headlines. To jump to the conclusion in your article is slanderous, dishonest, lazy, and very unprofessional and harmful to our business.

The author of the post, Warner Todd Huston, told the Daily Dot he is not involved with the social side of the site and did not supply the social media title. Young Conservatives does regularly use word-count phrases to tease their articles on social media.

Palin often shares unedited headlines from Young Conservatives, simultaneously to Facebook and Twitter, so whether she knew what she was doing is doubtful. Nonetheless, the phrase “14 Words” is still associated with white supremacy, which was tweeted out by a former Republican vice presidential candidate.

Prior to Palin’s tweet, others (on both the left and the right) noticed that Trump’s Polish address was veering in that territory.

A very good alt right sounding speech in #Poland by #Trump all we need now is the 14 words mentioned.

Update 3:59pm CT, July 7: This article has been updated for clarity and to include Young Conservatives CEO Josh Riddle’s response.

Very clever Sarah. Totally slipped that one by us Sarah. Nobody will notice Sarah. WINK WINK.

oh by the way you still have your hood on

Not even subtle at this point. https://t.co/6hCl3oBkk4

I did Nazi that coming!

Others claim the tie is tenuous, citing ambiguity in the original article.

I can't figure out which 14 word phrase she'd be alluding to. All of the quotes attributed in the linked piece are longer.

Update 3:32 pm CT, July 8: In a statement provided to the Daily Dot, Young Conservatives co-founder Joshua Riddle said: “There is, of course, no intention on our end or Sarah Palin to imply a connection to Nazism or white-supremacists. A very small number of far Left people on Twitter does not justify making a connection of this story to something as disgusting as Nazism.”