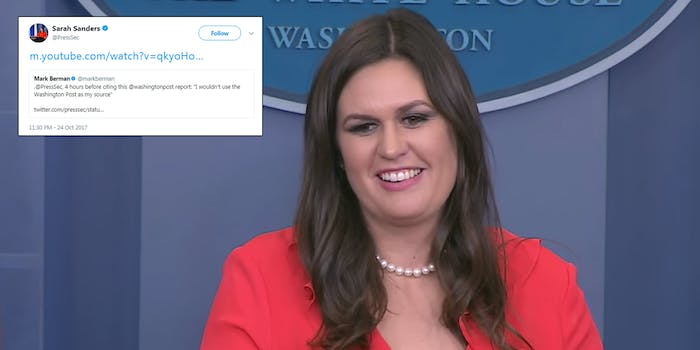 This isn't the first time Trump or his administration has shared articles from so-called 'fake news' outlets.

On Tuesday, White House Press Secretary Sarah Huckabee Sanders implied that the Washington Post was not a valid source of news–but judging by her Twitter feed, she probably only meant it wasn’t reputable when it didn’t further President Donald Trump’s message.

During Tuesday’s White House press briefing, Sanders dismissed a fact check by the Post regarding Sen. Bob Corker (R-Tenn.) and his vote on the so-called Iran Deal, which has been a point of contention during the president’s long-running Twitter war with the retiring senator.

“And as I’ve said many times before, I wouldn’t use the Washington Post as my source,” Sanders said, referring to the Post’s fact check.

However, her views on the newspaper seemed to change just hours later when she retweeted a link to the Post’s story on Tuesday evening about Hillary Clinton’s campaign and the DNC picking up the tab on the “pee tape” dossier. It has been known for months that unknown Republicans during the primaries first funded the dossier, but that Democrats later began paying for it.

“The real Russia scandal? Clinton campaign paid for the fake Russia dossier, then lied about it & covered it up,” Sanders wrote, retweeting a New York Times reporter sharing the Post’s story.

When a reporter for the Post tagged the @PressSec account in a tweet that highlighted the fact that Sanders’ opinion of the Washington Post’s accuracy changed within four hours, the press secretary retweeted him with a link to a clip of Dumb and Dumber on YouTube.

In the clip, Jeff Daniels’ character Harry Dunne appears to scold Jim Carrey’s character Lloyd Christmas, before changing his tune. “Just when I think you couldn’t possibly be any dumber, you go and do something like this,” Dunne says. “And totally redeem yourself!”

The inference being, of course, that Sanders and the Trump administration believe most of the Post’s stories “couldn’t possibly be any dumber,” but their latest article about the funding of the dossier redeemed them.

This isn’t the first time the Trump administration has flipped its opinion on so-called “fake news” outlets. In May, Trump retweeted the Drudge Report, a notorious right-wing aggregator, that linked to a story from CNN–which he has labeled as “fake news” many times in the past.