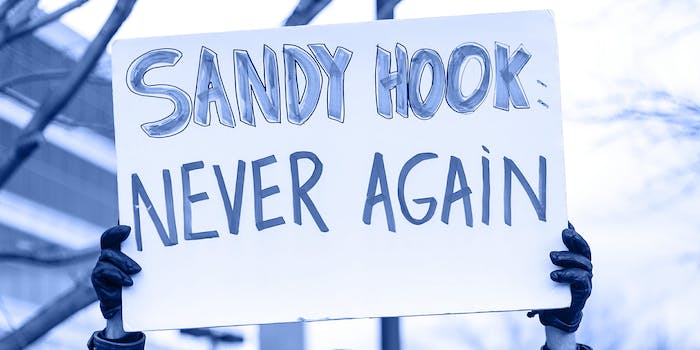 ‘We are unable to properly grieve for our baby or move on with our lives.’

The parents of one of the children who was killed in the Sandy Hook shooting in 2012 have written an open letter to Mark Zuckerberg, outlining how Facebook’s failures have affected their lives and the changes that could protect them.

“Almost immediately after the massacre of 20 little children, all under the age of seven, and six elementary school teachers and staff, the attacks on us began,” Leonard Pozner and Veronique De La Rosa, parents of Sandy Hook victim Noah Pozner, said in their letter to Mark Zuckerberg, which appeared in the Guardian. De La Rose and Pozner, along with other family members of victims, have been plagued by harassment since the shooting and say that Zuckerberg and Facebook aren’t doing all they can to protect them.

“While terms you use, like ‘fake news’ or ‘fringe conspiracy groups,’ sound relatively innocuous, let me provide you with some insight into the effects of allowing your platform to continue to be used as an instrument to disseminate hate,” the parents wrote. They shared their experience of having to move over and over, and still living in hiding, because of the conspiracy theory pushers who have targeted their family with death threats and harassment in every form. They say Facebook is structurally not built to protect them from harassment, and that they’ve had to fight “an almost inconceivable battle with Facebook” to get even the most basic protections, as well as to have obviously incendiary content about them taken down.

Families have had to go to extraordinary legal lengths to try to stop false claims about the tragedy being a hoax because social media platforms have refused to actively fight the disinformation. De La Rosa and Pozner say they were let down when Zuckerberg said Facebook would not remove hoax content like Holocaust denial and other conspiracy theories unless it actively promoted violence, and say the tactics Facebook uses to prevent the spread of that information does nothing to help them. They suggested that instead, Facebook should treat victims of mass shootings, and their family members, as a protected group, so attacks on them would be explicitly against Facebook policy. They also requested direct access to Facebook staff who can help them remove hoax content that can harm them faster than the reporting system.

“Facebook plays a mammoth role in exposing the world’s masses to information,” the parents said in their letter. “That level of power comes with the tremendous responsibility.”