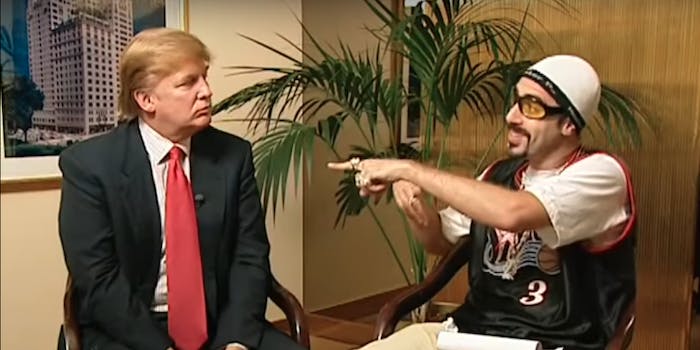 'Yesterday it was proven in de courts dat u iz a crook―respeck!'

After tweeting an Ali G interview scene with Trump from his 2003 hit show, the British comedian posted the exclusive statement in the unmistakable voice of Ali G via his personal Twitter account.

“2 my main man President Ronald Trump, check out when you colluded wiv me a few years ago,” he wrote. “Yesterday it was proven in de courts dat u iz a crook―respeck! U iz a genuine gangsta! And it turns out most of your crew are too innit!”

Ali G is, of course, referring to the double federal conviction on Tuesday of both Trump’s former campaign manager Paul Manafort and his former personal attorney Michael Cohen. The attorney pleaded guilty to paying off two women, presumably at the direction of Trump to influence the 2016 election although he didn’t identify Trump by name.

Impressed by this, Ali G goes on to describe president as the “Suge Knight of world leaderz,” aka the controversial founder of Death Row Records with a lengthy criminal record.

“Why iz you payin dem money to keep quiet about it?” Ali G asks. “We know it aint coz u haz got a tiny dong, u told everyone it woz massive on da telly, and one fing u ain’t, is a liar.”

“Anyway, peace out,” he signs off. “U iz a hinspiration for young people, showing dem u can become President of America without having to give up a life of crime. Bigupyaself O.G.”

Cohen has cleverly dropped the tweets just ahead of Sunday’s season finale for his current show Who Is America?, throughout which he has pranked lawmakers and activists on both sides of the political aisle.