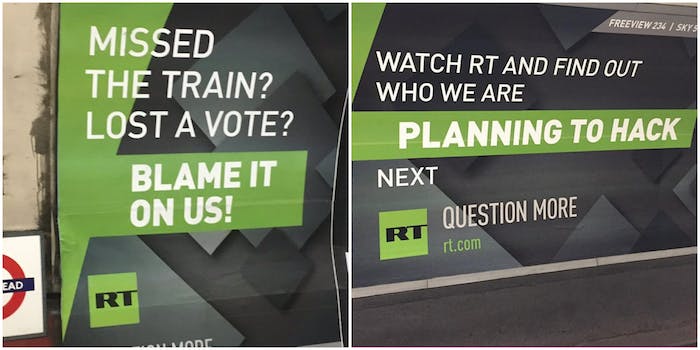 RT's new ads poke fun at both President Trump's election as well as the Russia investigation.

As the sprawling Russia investigation continues, Russia’s government-funded news network RT is striking back at the United States and United Kingdom with ads making light of the Russian hacking scandal.

RT’s latest ads went viral this week, after riders in the London tube and commuters in Washington, D.C., noticed the new promos. One ad in the London tube system reads, “Watch RT and find out who we are planning to hack next.” Another reads, “Missed the train? Lost a vote? Blame it on us!” The ads even joke about RT’s affiliation with the Russian government, saying “The CIA calls us a ‘propaganda machine,’ find out what we call the CIA.”

While everyone freaks out about Russian ads, RT takes out more Russian ads pic.twitter.com/Z5eW8GS6pg

RT’s ads hint to various criticisms levied against the network, including claims that RT is used to push the Russian President Vladimir Putin’s agenda and that RT attempted to influence the 2016 presidential election through favorably covering then-candidate Donald Trump. BuzzFeed News reached out to RT about the U.K.’s tube ads, and the network remained unapologetic about their tone.

“We wanted to go straight to the hearts and minds of the British people and warn them about the dangers of watching RT and Questioning More,” a spokesperson said to BuzzFeed News. “Obviously.”

The ads, which one Twitter user described as “on the nose,” have since gone viral. Many are comparing RT’s promos across regions, which universally scoff at the network’s reputation as a propaganda tool.

Is RT trolling or boasting?
Maybe both? pic.twitter.com/kmFTwmhwPx

In Moscow tour bus, one said "warning: you are reading an ad for a propaganda machine"

Russia Today ad on the tube. RT does not "question more" – it unquestioningly spouts Putin's lies to undermine our democracy and security. pic.twitter.com/spbWSeRqUQ

Most of all, though, the ads are scaring users in the West. If RT is openly embracing its reputation as a propaganda machine, that means the network isn’t trying to hide its motivations. It’s a sign that there’s a significantly large population of viewers that are sympathetic to RT, propaganda or not.

More than a tad scary that they're so arrogantly public about it. Apparent sense of impunity.

RT is no stranger to controversy, and ongoing political events both inside and outside of Russia have placed the government-funded network in the media spotlight. Facebook allegedly banned RT by mistake prior to President Trump’s inauguration, and one anchor quit live on the air due to Russia’s involvement in the 2014 Ukraine crisis. RT also popped up on C-SPAN’s live feed in January, raising questions across the U.S. about why and how the incident happened.