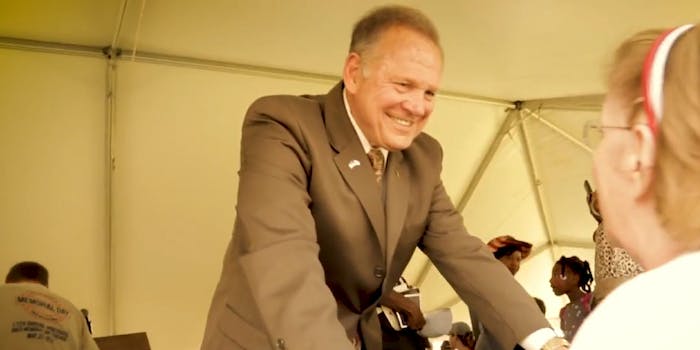 Moore and his campaign are continuing to deny numerous reports.

Campaign surrogates for Roy Moore, the Alabama Republican Senate facing multiple reports of sexual assault, tried to cast doubt on a yearbook signature provided by a fifth woman who says he attempted to rape her in the 1970s.

During a brief Wednesday afternoon press conference, Phillip Jauregui, Moore’s attorney, and Bill Armistead, Moore’s campaign chairman, said they wanted their own handwriting expert to examine the yearbook shown by Beverly Young Nelson, who said Moore attempted to rape her outside of a restaurant in 1975 when she was 16.

Jauregui and Armistead did not answer any questions from reporters, left the press conference quickly, and did not mention any of the other reports against Moore–including that he sexually assaulted a 14-year-old when he was 32.

“We’ll send it to a neutral custodian who will keep chain of custody and our professional expert will examine it, and we’ll find out: is it genuine? Or is it a fraud?” Jauregui said.

Nelson, during a press conference in New York earlier this week with her attorney Gloria Allred, said the former judge offered to drive her home after her shift at an Alabama restaurant, but instead of doing so, he parked behind it and assaulted her.

Jauregui tried to poke holes in Nelson’s claims that she never saw Moore since the time around the assault, saying that he presided over a divorce she went through in 1999.

Besides Nelson’s report of attempted rape, Leigh Corfman said Moore sexually assaulted her in his home when she was 14.

Other women have claimed that he pursued relationships with them when they were between the ages of 16 and 18. They said he did not force them into any kind of sexual contact.

Shortly after the press conference, Alabama.com published a story where Tina Johnson said that the former judge groped her in his law office in 1991 when she was 28 years old.

In light of the reports, several Republicans–including Senate Majority Leader Mitch McConnell–have urged Moore to drop out of the race. President Donald Trump has not weighed on Moore’s situation.

Update 7:51pm CT, Nov. 15: Two more women said late Wednesday that Moore made unwanted advances on them when they were teenagers, according to the Washington Post.