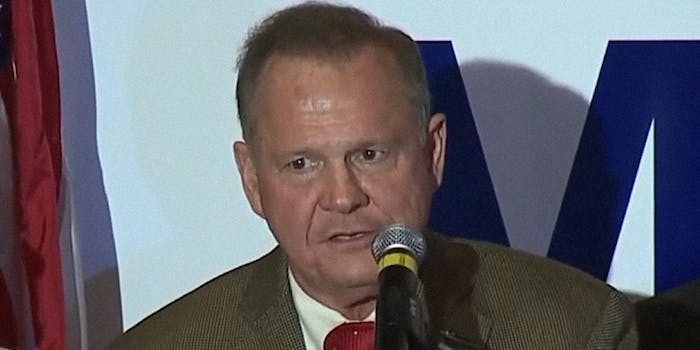 People who frequented the mall where Moore would pick up high school girls say his behavior was no secret.

Republican Alabama Senate candidate Roy Moore said that recent allegations leveled against him are an effort to derail his campaign. However, Gadsden, Alabama, locals who frequented the mall Moore was known to spend time at say they’ve known about Moore’s predatory behavior toward teenage girls for years.

According to people from Gadsden who have spoken to the New Yorker and AL.com, Moore’s habit of flirting with underage girls was “common knowledge” and “not a big secret.”

Blake Usry, a traveling nurse who grew up and lives in the town, said he knew several girls who Moore tried to flirt with, while two people recalled being told by either mall employees or police to watch out for Moore should they spot him at the mall. Several others interviewed said they recalled seeing Moore frequent the mall and high school events, or had been subject to his flirting.

“He watched us girls quite openly,” Victoria Beverstock, who waitressed at a restaurant Moore frequented in 1992, told AL.com. She was 20 at the time. “His eyes crawled over our shirts and our backsides. He was so open about it that I would try and handle his order as quickly as possible. When you didn’t smile and flirt back with him, give him an opening, he became rude and demanding.”

Others alleged that a de facto ban had been placed on Moore while they worked at, or were patrons of, the mall. Theresa Jones, a deputy district attorney for Etowah County in the early eighties, had previously told CNN last week that “it was common knowledge that Roy dated high-school girls,” but was unable to verify if Moore was actually banned from the space—it was a rumor she had heard for years, she said.

Gadsden law enforcement couldn’t confirm the mall’s ban on Moore, but two unnamed officers said his former presence was seen as problematic, to a point of being ran off from stores, though not legally banned.

“The general knowledge at the time when I moved here was that this guy is a lawyer cruising the mall for high-school dates,” one of the officers told the New Yorker.

On Monday, a fifth woman came forward about Moore’s behaviors, saying Moore tried to rape her when she was 16. She said two years later, Moore signed her yearbook. He was 30 at the time.

Several Washington Republicans have rescinded their endorsement of Moore in light of the allegations, including Texas Sen. Ted Cruz, who said that “there are serious charges of criminal conduct that if true, not only make him unfit to serve in the Senate but merit criminal prosecution.”

Moore has denied all allegations.