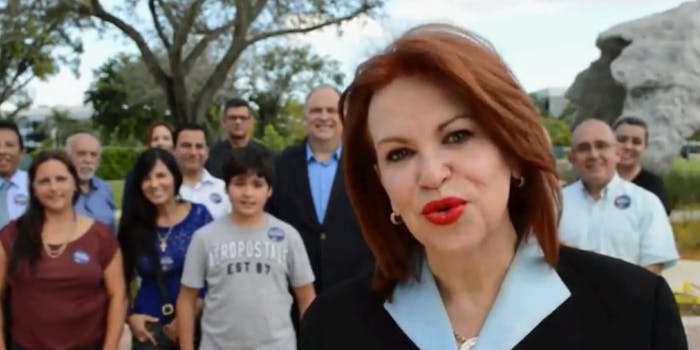 Florida GOP congressional candidate swears she was abducted by aliens

She has several out-of-this-world claims.

A Republican running to represent southern Florida in the House of Representatives says she was visited by aliens as a child.

Bettina Rodriguez Aguilera, 59, is running to take the place of Rep. Ileana Ros-Lehtinen, a Republican who represents Florida’s 27th congressional district. Rodriguez Aguilera says she was visited by three aliens when she was 7 years old. The extraterrestrial beings were blonde and “big-bodied,” McClatchy DC reports, and the group included one male and two females, according to Rodriguez Aguilera.

She also claims they have communicated with her telepathically since then.

However, Rodriguez Aguilera’s alleged experience with aliens was quite in-depth, according to McClatchy DC. Rodriguez Aguilera claims that the ship had round seats and “quartz rocks” that powered the spacecraft. The congressional candidate also claims she learned that there are thousands of skulls from different humans in a cave on the island of Malta; the world’s “energy center” is in Africa; and the Coral Castle, a limestone attraction in South Florida, is actually an ancient Egyptian pyramid.

The claims are highlighted in interviews, conducted in Spanish, which can be seen in several YouTube videos. Rodriquez Aguilera’s campaign website does not mention the encounters.

In a statement to the Miami Herald, Rodriguez Aguilera highlighted that other politicians have made claims about seeing unidentified flying objects.

“For years people, including Presidents like Ronald Reagan and Jimmy Carter and astronauts have publicly claimed to have seen unidentified flying objects and scientists like Stephen Hawking and institutions like the Vatican have stated that there are billions of galaxies in the universe and we are probably not alone,” she said. “I personally am a Christian and have a strong belief in God, I join the majority of Americans who believe that there must be intelligent life in the billions of planets and galaxies in the universe.”

You can read all of McClatchy DC’s report here.