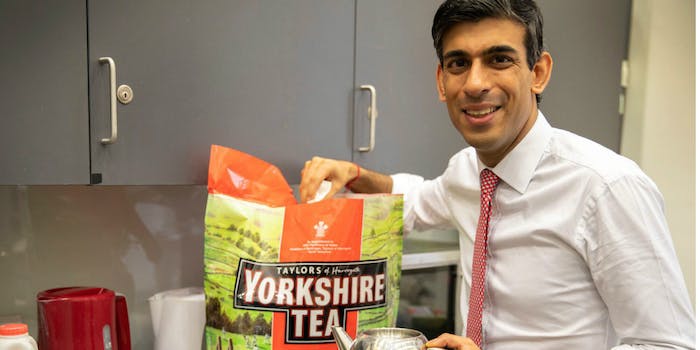 'Sue, you're shouting at tea.'

One Conservative member of parliament, a big bag of Yorkshire Tea, and a Twitter photo stirred a whole lot of drama on social media recently.

This is why the hashtags #SueYou’reShoutingAtTea and #YorkshireTeaGate trended on Wednesday.

What has since been dubbed Yorkshire Tea-gate started nearly a week ago when Conservative Member of Parliament Rishi Sunak shared a photo of himself with a big bag of Yorkshire Tea on Twitter.

The brand was eventually forced to clear up their involvement, or lack thereof, with the photo.

“We weren’t asked or involved – and we said so the same day. Lots of people got angry with us all the same,” it tweeted on Feb. 24.

One persistent tweeter was a person who goes by Sue.

“The last thing I want to do when I’m making a drink of tea is to think about what the #tory who was blatantly advertising your tea, paid or otherwise, will be doing to continue to grow the rich/poor gap,” Sue wrote in one tweet.

Her slew of angry tweets eventually led to Yorkshire Tea muting her.

“Sue, you’re shouting at tea. Please do look after yourself and try to be kind to others. We’re going to mute you now,” it tweeted in response to Sue.

British Twitter latched on to “Sue, you’re shouting at tea” and had a field day with it, leading the phrase to trend.

“‘Sue, you’re shouting at tea’ might one day end up in history textbooks as the most accurate reflection of Britain in 2020,” Twitter user @averagejoesblog wrote.

Another asked if the phrase was “the new OK boomer.”

“And as I typed yet another 240 character rant to yet another blameless company about something that had nothing to do with either of us, I took a pause and a long breath before asking myself; was I Sue shouting at tea?” one Twitter user wrote, along with a photo of Sarah Jessica Parker as her Sex and the City sex columnist character, Carrie Bradshaw.

Opportunists also got on board, attempting to monetize the controversy by selling T-shirts and other “Sue, you’re shouting at tea” merch.

In response to calls for a boycott of Yorkshire Tea, Twitter user @snigskitchen reminded users that the company “isn’t a party donor” and “doesn’t endorse a political position.” They included an old photo of Leader of the Labour Party Jeremy Corbyn with a bag of the tea.