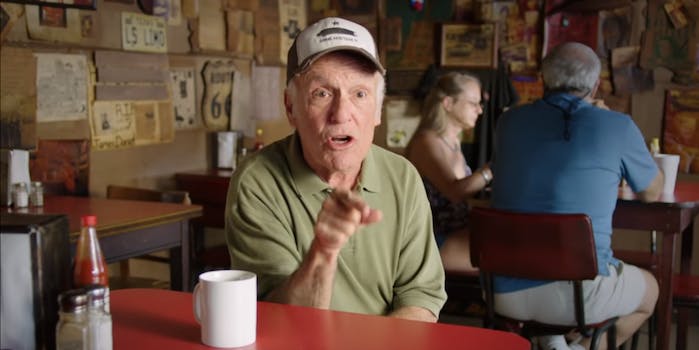 Sen. Ted Cruz who’s campaign slogan for the 2018 midterms asserts that he is “Tough as Texas,” has seen his fair share of criticism in the past several years. Since the loaded Republican race for president in 2016, Cruz has been in the spotlight not just for his voting record but for his strained relationship with President Donald Trump.

That strained relationship has yet again come into the spotlight with a new ad directed by Houston native Richard Linklater, who is known for directing movies like Dazed and Confused, Bernie, and Boyhood. The new ad, paid for by “Fire Ted Cruz,” takes a hit at Cruz’s claim to be “tough as Texas.”

The brief video features actor Sonny Carl Davis, who wastes no time ripping into Cruz and his slogan. “Ted Cruz tough as Texas?” Sonny says, chuckling to himself. “I mean come on. If somebody called my wife a dog and said my daddy was in on the Kennedy assassination, I wouldn’t be kissing their ass.”

The YouTube page “Fire Ted Cruz,” where the ad was posted has a simple “about” section that reads “Ted Cruz is bad for business, bad for Texas, and bad for America. It’s time for him to go. We’re going to help make that happen.” The page requests that interested parties make donations to Act Blue, a fundraising tool that describes itself as “powering Democratic candidates, committees, parties, organizations, and c4s around the country.”

The political action committee is led by Dallas lawyer Marc Stanley, who told Texas Monthly recently that “The truth is people know that Ted Cruz is not a very likable person … This is not the kind of guy we want to represent us. If we can use the humor and the creativity of Richard Linklater and The Bear (an Austin-based production team), it’s a great opportunity.”

The Senate race between Cruz and Democratic challenger Rep. Beto O’Rourke remains tight ahead of next month’s midterms. But according to FiveThirtyEight, Cruz is opening up a double-digit percentage points lead in the polls this week.