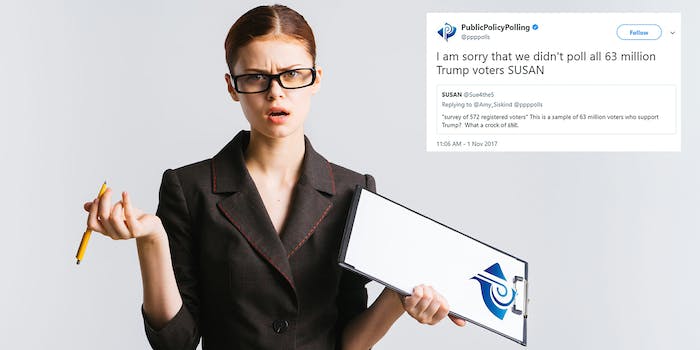 Political polls can bring out some passionate reactions in people. But sometimes even the pollsters can’t help themselves.

On Wednesday, Public Policy Polling (PPP) laid into a critic named Susan who complained that its poll’s sample size wasn’t large enough to provide an accurate representation of the American electorate.

I am sorry that we didn't poll all 63 million Trump voters SUSAN https://t.co/nMmN7Edwwp

“SUSAN,” as PPP put it, was responding to a tweet from Amy Siskind, founder of women’s advocacy group the New Agenda and a high-profile supporter of Hillary Clinton who shared a story about public support for impeaching President Donald Trump.

"survey of 572 registered voters" This is a sample of 63 million voters who support Trump? What a crock of shit.

As Siskind points out, the PPP poll in question finds a new level of support for impeaching Trump. And, indeed, the pollster did talk to just 572 registered voters, according to the methodology laid out in the poll. According to the National Council on Public Polling (NCPP), an association of pollsters that monitors polling quality and standards, the average sample size for public polls of this nature is around 1,000 people, so this PPP poll does have a relatively low sample size.

That said, PPP is a mid-tier pollster, according to FiveThirtyEight, which gives the organization a B+ in terms of its overall quality. Regardless of the sample size, people on Twitter loved PPP’s all-caps sass.

tfw statisticians have had enough with your lack of numerical fluency https://t.co/Q73DN0hsDg

While PPP’s sarcasm in its response to a random critic is unique, the pollster is known for embracing a more controversial public image. During the 2016 election, for example, PPP asked voters to rate political candidates against Harambe, the dead gorilla turned meme, and Deez Nuts, a kid who registered as an independent presidential candidate.

Given all that, Susan probably should have seen this one coming.