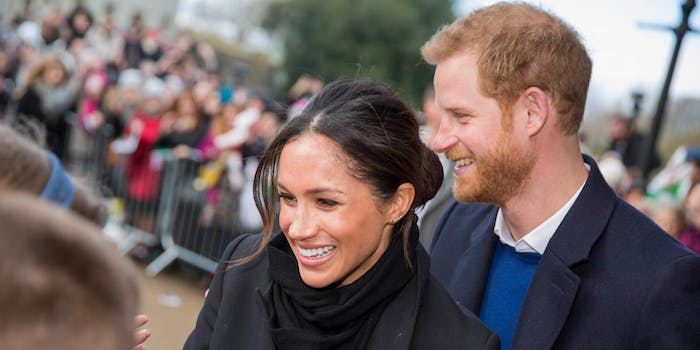 The poor guy probably has hidden bruises, surely this must be stopped.'

The internet is split on the Duke and Duchess of Sussex’s recent decision to step back from the crown.

The royal couple announced their decision last week, and the news was met with criticism and support in near-equal measure.

But as much of the internet continues to argue over Prince Harry and Meghan Markle‘s decision, a small sect of the web has another talking point. Some far-right internet users are spreading the theory that Prince Harry is suffering from emotional abuse. And that he needs to be saved.

The rumors have been around since Harry and Meghan first got together, but news of their recent announcement got believers fired up. People are taking to social media to call for Prince Harry’s rescue. “Prince Harry is a victim of emotional abuse from Megan, (sic) that woman has him whipped differently,” one user wrote.

Prince Harry is a victim of emotional abuse from Megan, that woman has him whipped differently.

Longtime believers in Meghan’s supposedly “manipulative” nature are feeling legitimized by the couple’s move and sharing their thoughts to anyone who will listen.

“If anyone can’t tell Prince Harry is in a domestic abuse situation then they are blind for Christ-sake they share an instagram” one Twitter user wrote. “Meghan makes ALL the decisions.”

Prince Harry is living with emotional abuse. She has constantly, belittled, & controlled Prince Harry. Prince or Pauper mental health, or physical occurs to all. Men and Women. https://t.co/qPzheWMoJ5

Prince Harry is the victim of emotional abuse. Abusers often seek to separate their partners from family, as Meghan is doing. If this were other way around, you’d have abuse experts on every network out. Since it’s woman-on-man violence, who cares?

There is no fool like a woke fool….Meghan only got an increased market value when she married Prince Harry and since then she has isolated him from his family and friends. That practice is a form of emotional abuse. Harry needs to think harder on who his loved ones really are.

Clearly #MeganMarkle is trying to isolate him from family, control his family and manipulate his life, all domestic abuse

The poor guy probably has hidden bruises, surely this must be stopped

Some people are even sharing examples of Meghan’s purported “abusive” behavior.

She touched his elbow? The utter gall.

It bears noting, though, that a great deal of the push of “emotional abuse” comes from a mix of far-right men and former pick-up artists. It’s easy to see that they would struggle to interpret and understand any woman asserting herself or having any agency in a relationship. Or, for that matter, a man agreeing with or even taking his wife’s wishes into account.

Instead, it’s Meghan the evil temptress stealing Harry away from the life he wanted.

Body language says it all pic.twitter.com/QVVPS0U3qL

I didn't realize there were so many of these videos. NPD master class. Take note, young kings https://t.co/aIedk7K4wy

The absolute state of this dynamic. pic.twitter.com/Q4DZSSCo0g

Meanwhile, much of the rest of the world is busy congratulating Harry and Meghan on their decision.

Unpopular opinion: I think Prince Harry stepping up to protect his wife and making sure Meghan is okay is brave. He is doing what a real man needs to do and he shouldn’t have to apologize for that.

“Unpopular opinion: I think Prince Harry stepping up to protect his wife and making sure Meghan is okay is brave,” another user wrote. “He is doing what a real man needs to do and he shouldn’t have to apologize for that.”