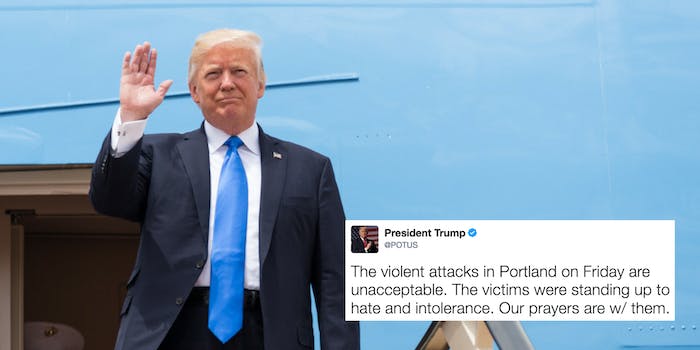 Trump's 'prayers' are with the men who stood up to white supremacy.

Three days after a white supremacist in Portland, Oregon, allegedly killed two men and attacked a third who confronted him for shouting an anti-Muslim rant at two teen girls, President Donald Trump tweeted a statement of condemnation from his official POTUS account.

“The violent attacks in Portland on Friday are unacceptable. The victims were standing up to hate and intolerance. Our prayers are w/ them,” Trump’s Twitter message reads.

The violent attacks in Portland on Friday are unacceptable. The victims were standing up to hate and intolerance. Our prayers are w/ them.

On Friday, three men were attacked on a train while attempting to stop Jeremy Joseph Christian, who has documented extremist and white supremacist views, from verbally attacking two young women.

“[Christian] said, ‘Get off the bus, and get out of the country because you don’t pay taxes here,’ [he said he] doesn’t like Muslims, they’re criminals,” Evelin Hernandez, a witness riding in the train car, told KATU.

According to the Oregonian, Ricky John Best, 53, and Taliesin Myrddin Namkai Meche, 23, were killed in the attack. Micah David-Cole Fletcher, 21, also suffered knife wounds and is recovering at a local hospital. A GoFundMe page for Fletcher has raised more than $178,000.

The teen girls were not injured. One of the girls, Destinee Mangum, 16, gave a tearful interview to local media thanking the men for intervening on behalf of her and her friend. Mangum is not Muslim, but her friend is and was wearing a hijab when the incident occurred.

Destinee Mangum, one of the targets of hate speech on a MAX train, thanks strangers for saving her life. pic.twitter.com/sefmOAyIVt

“I just want to say thank you to the people who put their life on the line for me,” she told KPTV. “Because they didn’t even know me, and they lost their lives because of me and my friend and the way we look.”

Christian was arrested and is charged with aggravated murder and attempted murder.

The site of the Portland Tri-Met stabbing is covered in flowers and thank you notes. pic.twitter.com/fMJLmCUtdF

Today I also memorialize these heroes, 2 who fell/1 recovering, who gave their lives stateside in defense of freedom. #MemorialDay #portland pic.twitter.com/K20Can2hql

The president’s acknowledgement of the incident comes after a number of high-profile pleas for him to speak out against the violence and intolerance, including one penned by Dan Rather.

While Trump’s tweet was sent via iPhone from his POTUS account (not his more-active personal account), there’s no way to tell if Trump sent the tweet himself. According to Recode, Trump hasn’t tweeted from his unsecured Android phone, which once helped reporters to tell the difference between a Trump-penned tweet and one sent by aides, in two months.

North Korea has shown great disrespect for their neighbor, China, by shooting off yet another ballistic missile…but China is trying hard!