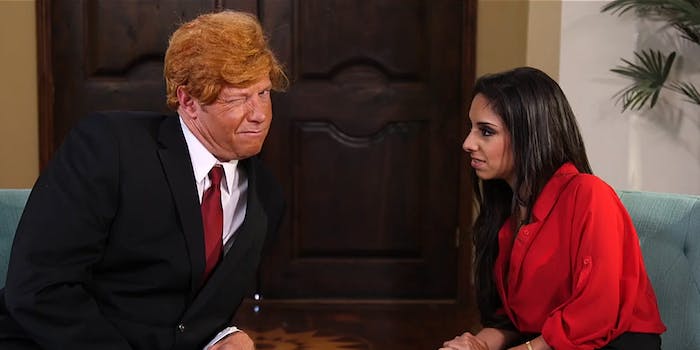 The genre is remarkably robust.

In the movie, Palin meets up with a pair of Russian soldiers and even gives a press conference. In terms of historical accuracy, Who’s Nailin’ Paylin? takes a lot of creative liberties

There’s a relatively SFW version available on YouTube. The clip features opening credits set to Alaskan photos of bears and salmon. In one scene, Palin opens her door to the Russians and after a bit of linguistic confusion, she declares, “In the spirit of foreign relations, I’m sure there’s no harm in me letting the two of you in.” The video then cuts to the Bill O’Reilly character (on his show The Orally Factor) as the broadcaster tells viewers “once again, the hypocritical left is trying to have it both ways.”

In the video, the president (as portrayed by Dick Chibbles) is interviewed by a young woman before they launch into some off-the-record sexcapades. Did someone say fake news?

The memorable quote from this gem is Chibbles saying, “Let’s have sex while I whisper racist comments in your ear.”

In the opening scene, two female co-stars stroke his ego by holding up mock images of Trump on the front pages of Time and Forbes magazines. Britney Amber tweeted out a NSFW version of the Time cover. In another scene, Trump auditions “Marco Rubio” to be his vice president by asking the Florida senator to “fuck the shit out of middle-class America.”

In this case, middle-class America happens to be a blond.

In February, the actress told TMZ that she “doesn’t do parodies.”