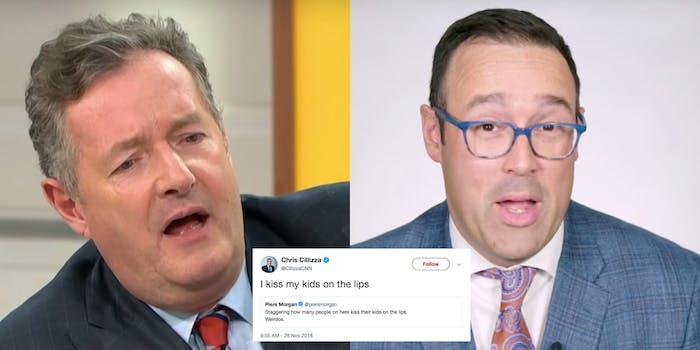 Piers Morgan, Chris Cillizza reignite debate about kissing your kids on the lips

CNN pundit Chris Cillizza tweeted on Tuesday that he kisses his children “on the lips,” inciting ridicule and sparking yet another Twitter debate about whether or not it’s appropriate to do so.

I kiss my kids on the lips https://t.co/IxwHvv8oqS

It started when TV personality Piers Morgan, who has a habit of interjecting his opinions on parenting whether they’re wanted or not, said it was “staggering” that other Twitter users were mouth-kissing type parents.

Staggering how many people on here kiss their kids on the lips.
Weirdos.

People on Twitter started responding to Morgan’s tweet with pictures of themselves kissing their children on the lips to prove there’s nothing inappropriate about showing your children some love.

Many defended the act.

“It’s called unconditional love for your kids and showing affection,” Twitter user @Abbo9966 wrote. “The fact some people even think along other lines is weird… What a sad world we now live in.”

It’s called unconditional love for your kids and showing affection. The fact some people even think along other lines is weird. Very very weird. What a sad world we now live in

Whoever thinks it's weird clearly has noncy thoughts.

Absolute fact mate, it being weird doesn't even enter my mind as I see my kids as kids. Any other thought like the one Morgan has is just noncy

Sports stars David Beckham and Tom Brady have previously made headlines for sharing their love of mouth-kisses with their children.

Still, many people maintain that adults shouldn’t kiss their kids on the lips.

It’s not even about anything being sexualized I just don’t think it’s right period it’s gross us as adults use our mouths for many things so we should not be kissing our kids on the lips idk https://t.co/LWooBonAos

And plenty of others agree there’s nothing wrong with kissing kids on the lips.

Of course it's appropriate. I feel bad for children whose parents don't show them affection

For others, there was a much more difficult debate on hand: who they wanted to disagree with more, Cillizza or Morgan.