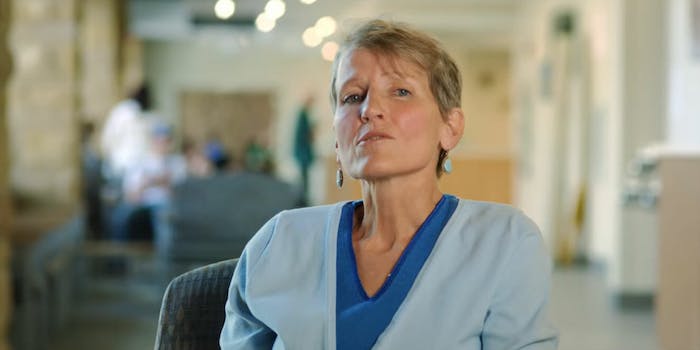 And you thought your family hated politics.

In the world of politics, brutal attack ads are nothing new. A dark orchestra here, a shadowy bit of footage there, an ominous voice warning you of the impending doom. What’s also fairly normal in politics is for family members to join pro-candidate ads to give them a sense of warmth and love. How can this person be against your interests when his family is so much like yours?

But what if those family members wanted nothing to do with you? What if, like Republican Arizona Congressman Paul Gosar, your siblings positively despised you? Well, you get this darkly hilarious political ad.

On my first watch, I was a bit confused as the talking heads went along. Is this some sort of joke? Are these the same two actors playing a bit? Nope, it’s just Congressman Paul Gosar’s siblings absolutely trashing him in a new ad promoting Gosar’s opponent, Democrat David Brill.

It’s one in a short series of videos starring Gosar’s siblings, each of which has at least one sibling reflecting at length on how their brother’s politics don’t reflect their family’s values.

“I think my brother has traded a lot of the values we had at our kitchen table,” said one of the six Gosar siblings who appear in the various ads.

Gosar has represented Arizona’s Fourth Congressional District since 2011. In that time, he’s suggested, without any evidence, that liberal donor George Soros may have been a Nazi collaborator in a Vice News documentary.

In an interview with the Phoenix New Times, David Gosar had harsh words for his brother after the congressman suggested in the aforementioned Vice interview that George Soros bankrolled the neo-Nazis that marched on Charlottesville in 2017. The conspiracy theory was propagated by the likes of Alex Jones’ InfoWars.

Gosar is also a strong proponent of Trump’s anti-immigration and anti-refugee policies. Gosar issued a statement in January urging Attorney General Jeff Sessions to check IDs at the State of the Union address and arrest and deport all Dreamers if they attended. Gosar also flew to London to speak at an anti-Muslim rally, with his travel funded by the anti-Muslim Middle East Forum group.

“None of us are doing this for publicity. None of us even want to do it,” David Gosar said to the Phoenix New Times.

Brill told the Phoenix New Times that he declined to meet any of the Gosar siblings “so they could be themselves.”

"What are we supposed to do when Paul makes excuses for the Charlottesville Nazis, goes to a march for Tommy Robinson, a despicable right wing British thug and gives a speech, is a birther, slanders an old man, George Soros, who didn't do anything wrong to him…." (2/4)

and then refuses to apologize, is on a mission to destroy health care coverage, denies climate change despite not having a clue of what he's talking about, and supports a policy of kicking out DACA kids and taking babies away from parents at the border? (3/4)Are we supposed to be

"Are we supposed to be silent? Or if we don't, when we speak out we're included in the term, "petty?" None of this is even close to being any kind of a joke to us." (4/4)

Update 2:44pm CT, Sept. 22: Gosar has responded to the ads on Twitter, saying, “My siblings who chose to film ads against me are all liberal Democrats who hate President Trump. These disgruntled Hillary suppporters are related by blood to me but like leftists everywhere, they put political ideology before family. Stalin would be proud. #Az04 #MAGA2018“