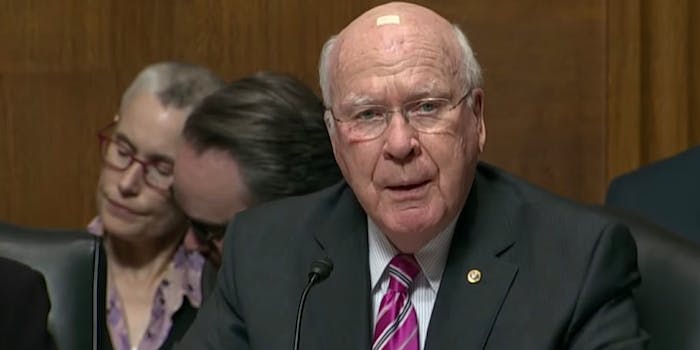 Posting a selfie to social media can be a nerve-wracking experience. You might, for example, fear being ridiculed on your angle or the potential of being turned into a meme. That’s exactly what happened when Sen. Patrick Leahy (D-Vt.) tweeted an innocuous photo of his face without context on Thursday—but the 78-year-old seemed to be taking the jokes in stride.

The close-up of Leahy’s face was met with commentators’ attempts at giving the photo a witty caption. Many people had the same idea: Maybe Leahy, like many selfie-takers before him, was “feeling cute” in the moment (though it’s always safest to suggest you “might delete” a poorly-received selfie later).

yes, hello, i'd like to cancel the internet? pic.twitter.com/4hqkiDLmlH

Others were immediately reminded of Leahy’s cameos in Batman movies, including The Dark Knight.

Nice try. I know Christian Bale when I see him. https://t.co/Up5kuRXGP0

I’ll never forget when this everyday hero stood up to the Joker. https://t.co/OLyGsOwxA4

This looks like the headshot he sent in to play Dick Cheney in that Christian Bale movie. https://t.co/P1MgHIZIRH

Some just appreciated Leahy’s ability to work the camera.

Thank you Senator, for looking like a damn snack https://t.co/l0myANF9fO

Unsurprisingly, the selfie has already been combined with other memes.

u: hey
me: wat
u: just wanted to take another gander at ye
me: https://t.co/ALtkEvaNVy

And adapted for the political news of the hour.

The face you make when someone says the supplemental FBI investigation was thorough and showed no corroborating evidence. https://t.co/g0gpwFrCuy

It’s unclear what motivated Leahy to tweet the photo in the first place, and whether it was intentional or just an awkwardly misfired post. The senator did confirm in a follow-up tweet, however, that “yep … that’s me.”