Eddie Colla pays tribute to the Occupy Wall Street movement with a patriotic rendering of the iconic Guy Fawkes mask. Eddie Colla’s rendering of the Guy Fawkes mask is becoming one of the defining images of the Occupy Wall Street movement.

Like Shepard Fairey’s “HOPE” poster, the image is clean, simple, and effective – an American flag stenciled over a Guy Fawkes mask, the same one worn by the hacktivist group Anonymous – and thanks to the photo-sharing site Flickr, it’s spreading quickly. Sometimes the text on the graphic reads “NINETY NINE TO ONE,” an homage to the the OWS motto “We Are the Ninety-Nine Percent.” Other times the graphic says “Occupy Chicago” or whatever city you happen to be in.

A California-based artist, Colla designed the graphic after becoming inspired by the first photographs to emerge from OWS in New York City. (The NYPD quickly cracked down on protesters wearing V for Vendetta masks using an old law that prohibits groups from protesting while wearing masks.)

Colla doesn’t consider himself a street or graffiti artist, but there’s no denying his work’s prominence in public spaces. Since early October, Colla has mailed more than 6000 stickers to 40 states and 12 different countries, per requests on Flickr. Colla also offers the image for download on his Flickr account, and people have taken to sending him pictures of the graphic, once they’ve received them or placed them on the street. 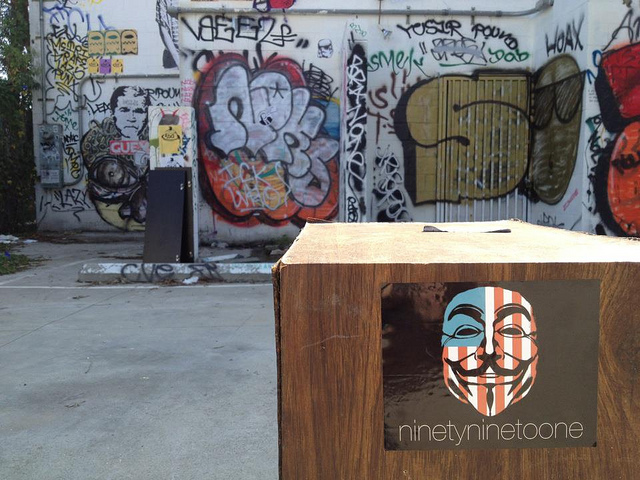 Comparable to the Occupy George movement, Colla‘s happy to distribute his image for free. “It’s just my small way of helping,” he wrote to the Daily Dot. “You can’t support a movement against corporate greed [and] consumerism… and then monetize and commercialize the movement.”

There’s no way for Colla to keep track of how many people have downloaded his images on Flickr, but the downloadable set has received more than 1,000 views. The Occupy Tampa graphic alone has been been viewed 300 times.

An avid supporter of the Occupy movement, Colla has attended both the Occupy Oakland and Occupy San Francisco protests and firmly believes the “priorities” of corporations and banks “do not reflect that of most Americans.”

“The balance of power in this country has become completely lopsided,” Colla said. “Corporations and [banks] have used the majority of the population as a resource to amass ridiculous amounts of wealth. They have done this with inadequate oversight, complete irresponsibility, and little or no accountability.”

As for using an image copyrighted to the media conglomerate Time Warner, Colla admits he’s received some negative feedback over the use of the mask, with some people suggesting that “it goes against the spirit of the movement.“

However, Colla insist that, like much of the original punk rock movement, it’s done for the culture-jamming effect. And thanks to Flickr, it’s sticking.

“I rather like the idea of appropriating something from a corporation and using it as a symbol of opposition,” he said. “At a certain point symbols can be completely hijacked to the point where their origin becomes secondary to their appropriated meaning.”