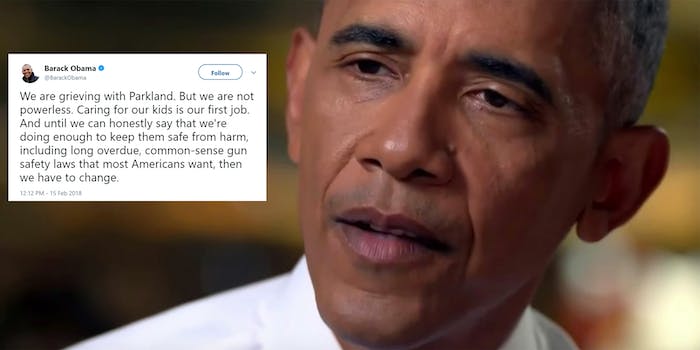 'We have to change.'

Trump announced a day after the mass shooting in Parkland that he would visit the town where a gunman killed 17 people in the deadliest school shooting since Sandy Hook. Trump said he plans to work with officials to “help secure our schools and tackle the difficult issue of mental health.”

He did not mention guns in his speech. Minutes later, Obama tweeted.

“We are grieving with Parkland,” Obama wrote. “But we are not powerless. Caring for our kids is our first job. And until we can honestly say that we’re doing enough to keep them safe from harm, including long overdue, common-sense gun safety laws that most Americans want, then we have to change.”

We are grieving with Parkland. But we are not powerless. Caring for our kids is our first job. And until we can honestly say that we're doing enough to keep them safe from harm, including long overdue, common-sense gun safety laws that most Americans want, then we have to change.

Trump mentioned the mental state of the Parkland shooter in his address and in a tweet.

Obama’s first term record was more focused on gun rights than gun control, according to PolitiFact. But the former president expressed in 2012 during his re-election campaign that he wanted to reintroduce a federal assault weapons ban because “weapons that were designed for soldiers in war theaters don’t belong on our streets.”

Although a new ban on assault weapons didn’t gain traction in Congress under Obama, he promised to bolster existing laws and introduced a plan to reduce gun violence by limiting magazine sizes, strengthening background checks, and focusing on mental health treatment.

Some are calling out Trump for only mentioning Cruz’s mental state and neglecting to address gun control. The hashtag #GunReformNow trended on Twitter a day after the shooting.

The 19-year-old who confessed to killing at least 17 people in the Parkland shooting is a former student of the school he attacked. Nikolas Cruz had previously attended Marjory Stoneman Douglas High School before being expelled and enrolling in another school in the area. He legally purchased the AR-15 rifle used in the shooting, according to the New York Times.

In addition to an AR-15 rifle, Cruz had “countless magazines” and had clearly prepared for the attack, Broward County Sheriff Scott Israel reportedly said.

According to a Gallup poll conducted this year, 46 percent of Americans support stronger gun laws. The Parkland shooting is the latest of more than 40 “active shooter” episodes in schools that have been recorded in the U.S. since 2000, according to the FBI and the Times.