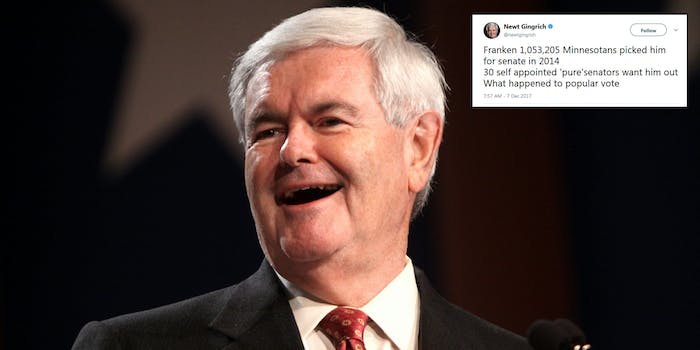 Former Speaker of the House Newt Gingrich appeared to tweet in defense of Sen. Al Franken (D-Minn.) on Thursday morning, arguing that senators calling for him to step down amid a growing number of sexual misconduct allegations does not outweigh him winning an election.

But others think his intentions were beyond just Franken, and he instead laid the groundwork to justify the possible election of Republican Alabama Senate candidate Roy Moore, who several women have come forward to say he engaged in sexual misconduct with them in the past, including attempting to rape a 16-year-old and sexually assaulting a 14-year-old.

Gingrich also brought up the “popular vote” in defense of Franken, which–of course–set off alarms on Twitter.

“Franken 1,053,205 Minnesotans picked him for senate in 2014,” Gingrich wrote. “30 self appointed ‘pure’senators want him out What happened to popular vote.”

Franken 1,053,205 Minnesotans picked him for senate in 2014
30 self appointed 'pure'senators want him out
What happened to popular vote

There is speculation that Franken will resign on Thursday after multiple women have come forward to say that he groped them or forcibly kissed them in the past. On Wednesday, an avalanche of senators called on Franken to step down from his position.

The tweet sparked numerous responses from people jumping on Gingrich’s use of “popular vote” to justify Franken staying in the Senate, while others seemed shocked that Gingrich would defend someone accused of sexual misconduct.

A large portion of people commenting on the tweet instead saw it as a future defense for Moore, who despite the numerous sexual misconduct reports against him, is leading in most Alabama polls and has received an endorsement from President Donald Trump.

Whatever their point of contention was, people let Gingrich have it on Thursday morning.

Can we talk about the popular vote for @realDonaldTrump election? https://t.co/QynVQuaaqQ

He led the impeachment effort of a POTUS who twice won popular vote. https://t.co/vGhcpwrVmp

Just because newt has no morals doesn't mean others don't. What a putz. https://t.co/tomvfPQf3V

They know if Franken goes they will look like even bigger clowns defending Roy Moore. https://t.co/a8TMjil3Ds

Gingrich and other GOP "leaders" are sure setting the table for a Roy Moore win in Alabama and justifying seating him as a U.S. Senator despite the mass of sexual harassment/assault allegations against him. Pathetic. https://t.co/AXSzbNGxKF