Commenting on the current national debate on abortion, or just crossing the line? People’s feathers will get ruffled when you use the image of a coat hanger when referencing abortion.

That’s the takeaway from the latest controversy involving the Newsweek Tumblr account, who earlier today changed their site’s cursor to a coat hanger.

The move was inspired by a Huffington Post article detailing how the GOP’s platform regarding abortion is in line with the views espoused by Senate candidate Todd Akins, who earlier this week stated in an interview that women cannot be impregnated during “legitimate rape.”

Newsweek quickly called out the news aggregator site by posting a screenshot of it on their Tumblr page. Attached to the image was the text “Whoa there, Huffington Post!”

The story could have died there had it not been for comedian and social media juggernaut Rob Delaney, who responded to the Newsweek post by saying, “This is far less horrifying than your Niall Ferguson cover story this week.” Delaney was referencing noted conservative and Harvard professor Ferguson’s “Hit The Road, Barack,” an article heavily criticized by The New York Times, Politico, The Atlantic, and others for being factually inaccurate.

The Newsweek Tumblr shot back with the following:

“Reeeeeally?! A coat hanger, signifying one of the most desperate and terrifying abortion methods that women have had to resort to over the years, is more horrifying than a known conservative’s case for firing the President?! There’s political discourse– and then there’s this. We’re biased, obvs, but gonna have to disagree with you on that.”

Again, that could have been the end of the Internet feud. All parties involved could have walked away from the conversation. When it comes to the Internet, though, that’s rarely the case. Newsweek escalated the situation by changing their Tumblr’s cursor to a coat hanger. 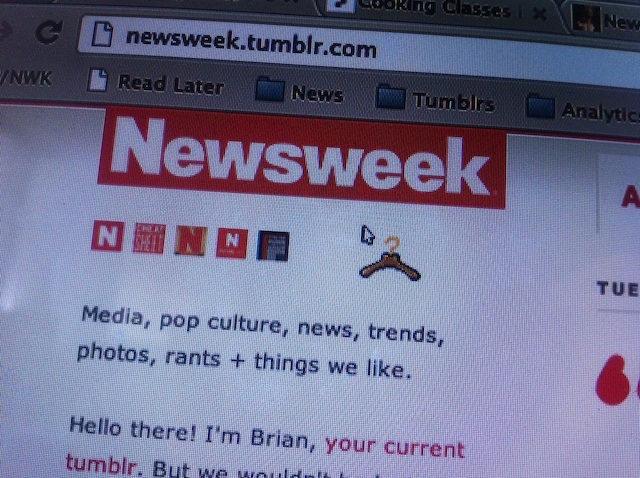 The following text accompanied the image above:

“We’re retiring the mustache cursor for the day. Here’s our new one: a coat hanger.”

The Internet’s reaction has been polarizing. The majority have responded negatively, running the gamut from disbelief to anger.

Others have been praising the move by claiming that it sheds light on the topic at hand. Newsweek chose to reblog two posts that give credit to the publication.

For their part, the administrators of the Tumblr issued a statement defending their decision:

“The coat hanger has clearly become a symbolic icon that triggers outrage and debate in our hearts and minds. We chose to switch the Tumblr cursor to a coat hanger after seeing the strong reactions our friends at the Huffington Post received. After all, 40 years after the Roe. v. Wade decision, a woman’s right to choose is still leading the national debate—and influencing the Republican Party’s national platform.”