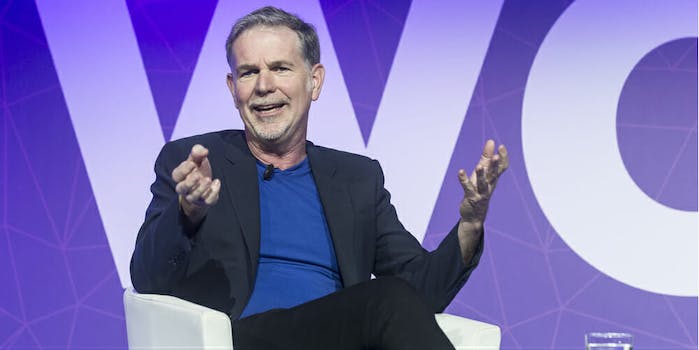 Netflix and it's CEO seem to feel differently when it comes to abortion.

Netflix and its CEO don’t appear to see eye-to-eye.

Despite the company’s apparently firm stance on the restrictive Georgia abortion bill signed on May 7, the company’s CEO, Reed Hastings, donated upwards of $140,000 to Republicans who supported an abortion ban in Missouri. The donations came over the last 10 months, according to CNN Business, and were spread out among 73 different Republican lawmakers.

Hastings contributions totaled $143,000, and in November he contributed the maximum donation amount of $2,600 to Missouri Governor Mike Parson. Parson signed a bill in late May prohibiting abortions after 8 weeks of pregnancy, only two weeks more than the Georgia bill.

According to CNN, the string of donations from Hastings seems out of character. Over the past 20 years or so, Hastings made the majority of his contributions to Democrats. Hillary Clinton, Barack Obama, and John Kerry all received donations from him at some point. In the same 10 month period that he shelled out $143,000 to Republicans, Hastings donated $10,700 to Democrats in Missouri.

The contributions were intended to support education, according to a source cited by CNN. “All of these personal donations from Reed, on both sides of the aisle, were made in support of a specific piece of legislation aimed at improving the availability and quality of charter schools in Missouri,” the source told CNN.

Netflix also showed an increased interest in Missouri over the last several months. According to Dan Auble, a senior researcher with the Center for Responsive Politics, the company hired a lobbying firm to work within the state a few months back.

“They are undertaking a concerted campaign here,” Auble told CNN. “Whatever it is that Hastings and Netflix are trying to get done—or stop—in Missouri it is clear they will have the ear of legislators to make their case.”

Netflix films several series—including Stranger Things and Ozark—in Georgia. With the company’s stance on the Georgia abortion law, it may need to find new locations for these projects. In a Tuesday statement, the company said it may rethink its investment in Georgia, which offers film companies a 20% tax credit.

“We have many women working on productions in Georgia, whose rights, along with millions of others, will be severely restricted by this law,” the statement read. “Should it ever come into effect, we’d rethink our entire investment in Georgia.”