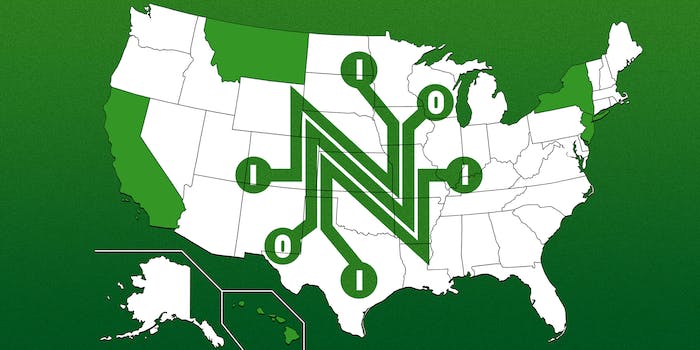 How states are fighting the FCC for net neutrality

After the Federal Communications Commission (FCC) voted last year to repeal net neutrality laws, the only hope for rectifying the situation seemed to be Congress overturning the decision.

However, a growing number of states have begun passing their own versions of internet traffic protection laws—and several of them have joined a multi-state lawsuit against the FCC.

It shouldn’t come as a shock that some states are taking matters into their own hands. The decision to repeal net neutrality, a founding principle of the internet that ensures all internet traffic is treated equally by internet service providers (ISPs), sparked numerous protests and public outcry.

How states are fighting the FCC for net neutrality

In late May, California’s Senate passed a net neutrality bill that was lauded by internet rights groups as the “gold standard” for states hoping to pass laws in lieu of the FCC’s vote to rescind federal protections in late 2017.

The bill, S.B. 822, prevents ISPs in the state from blocking, speeding up, slowing down, or offering so-called “paid prioritization” for internet speeds. The bill still needs to pass through the state’s Democratically controlled Assembly and be signed by Gov. Jerry Brown (D) before becoming law.

“Internet users are furious about the FCC’s disastrous repeal of net neutrality, and they’re mobilizing en masse to get it back by any means necessary,” Evan Greer, the deputy director of Fight for the Future, said in a statement following the vote. “Today the California State Senate read the writing on the wall, sided with the public, and voted to defy Ajit Pai and enact strong protections against ISP censorship and abuse.”

Earlier this year California’s Senate passed a different net neutrality bill by a 21 to 12 vote. However, the one passed in late-May replaced it.

An effort by lawmakers in Connecticut to pass similar net neutrality laws as other states fell short in late March after Republican senators used a procedural quirk to kill the bill.

The Connecticut Post reports that Republican Sen. Paul Formica, the chair of the state’s Energy and Technology Committee, split the committee’s votes resulting in a tie and killing the net neutrality bill from reaching a full vote.

“It was something that we think is a federal issue and we think should be handled at the federal level,” Formica told the news outlet. “We didn’t want to subject our state to any lawsuits which we knew would be coming.”

“If you want a bill to die, just like if you want a bill to succeed, you should have the votes for it to die or succeed,” Sen. Gary Winfield, a Democrat, said. “I’m not saying that they don’t have the right (to split the committee) because the rules allow for the procedure, but I think it’s cleaner if you vote it up or down.”

The bill would have given the state authority to regulate internet within its boundaries.

In late February, Washington state passed legislation pushing back against the FCC’s net neutrality repeal. The bill passed with overwhelming support in the state Senate and House of Representatives.

“At the core of our action today is consumer protection,” Inslee told the newspaper. “States need to act because under the Trump administration, we have seen citizens, including seven million in Washington, stripped of core protections like the open internet.”

“There has been a lot of talk around the country about how to respond to the recent decision by the Federal Communications Commission to repeal net neutrality rules, which keep the internet free and open. It’s time to actually do something about it,” Bullock said in a statement. “This is a simple step states can take to preserve and protect net neutrality. We can’t wait for folks in Washington, D.C., to come to their senses and reinstate these rules.”

The law gives ISPs a six-month grace period to adjust, and companies like Charter, CenturyLink, AT&T, and Verizon will soon have to operate in Montana as though the FCC’s decision never happened.

Bullock also tweeted out a “template” that he said “any city or state” could use.

Just a few days after Montana enacted its law, New York followed suit. Gov. Andrew Cuomo signed an executive order that mirrors the one in Montana by requiring ISPs with state contracts to abide by net neutrality rules. The order does not allow ISPs to “block, throttle, or prioritize internet content or applications or require that end users pay different or higher rates to access specific types of content or applications.”

“The FCC’s dangerous ruling goes against the core values of our democracy, and New York will do everything in our power to protect net neutrality and the free exchange of ideas,” Cuomo said on Twitter.

Newly elected Gov. Phil Murphy announced in early February that New Jersey would also put pressure on ISPs doing work in the state. The order would apply to ISP contracts that are executed “on or after July 1, 2018.”

The order would require state agencies to only execute contracts with ISPs that “adhere to net neutrality principles” and requires ISPs not to “block lawful content,” “throttle, impair or degrade lawful internet traffic,” “engage in paid prioritization,” or “unreasonably interfere with or unreasonably disadvantage” users ability to access or use the internet.

At the same time, Murphy said New Jersey would join the multi-state lawsuit against the FCC’s decision to overturn net neutrality rules.

“We may not agree with everything we see online, but that does not give us a justifiable reason to block the free, uninterrupted, and indiscriminate flow of information,” Murphy said in a statement. “And, it certainly doesn’t give certain companies or individuals a right to pay their way to the front of the line. While New Jersey cannot unilaterally regulate net neutrality back into law or cement it as a state regulation, we can exercise our power as a consumer to make our preferences known.”

Gov. David Ige signed a net neutrality executive order on Feb. 5. The order directs state agencies only to contract with ISPs that agree to abide by net neutrality principles.

“An open internet is critically important to our people and our economy, connecting us to the rest of the world, increasing our commerce, fostering innovation, and adding to our economic growth. I have worked with my cabinet members, members of the House, and other stakeholders to protect the integrity of this critical resource,”  Ige said.

Hawaii‘s state legislature is also trying to pass a bill that would regulate internet service and examine whether a state-owned public utility company providing internet service was a viable option.

This article will be updated as more states pass similar net neutrality laws.