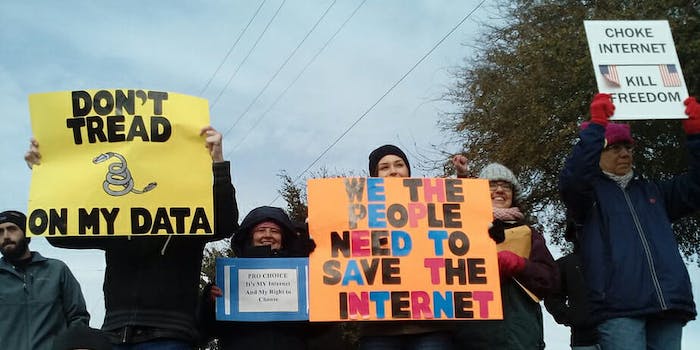 Report: Sprint is already throttling Skype so you’ll use its video chat

Major telecom providers seem to be cracking down.

A rollback of net neutrality protections is officially affecting the average consumer.

Video services like Skype are being throttled by U.S. cell phone networks, according to an ongoing study conducted by Northeastern University and the University of Massachusetts. Providers are slowing video streaming to their consumer base, and many are working to throttle the life out of their major video competitors—from Skype to YouTube.

More than 100,000 consumers participated in the study. Researchers provided a phone application called Wehe to track users’ internet connection. The goal was to determine whether internet-service providers (ISPs) are differing the amount of bandwidth provided to particular apps. A total of “719,417 tests in 135 countries around the world” were conducted, according to the study.

Skype has lived a long and illustrious life, as applications go. The video chat app was created in 2003 and is still going today. The study found that Sprint is the only major provider in the U.S. working to undermine Skype. According to Fortune, 34 percent of 1,968 full tests revealed efforts on Sprint’s part to slow down bandwidth for Skype. This forces users to endure glitchy, distorted calls or select another application. Android users were far more affected in this case than Apple users.

“In the case of a video call, which is what we were testing, the video quality would be much poorer—poorer than what the network supports,” David Choffnes, a researcher behind the app, told Fortune. This is of particular note because Sprint offers an option similar to Skype, which reveals itself as a far better option when your Skype call won’t stop crashing.

Other findings in the study indicated that T-Mobile was guilty of nearly the opposite. The German company is participating in what the study called “boosting,” in which it “provides unthrottled bandwidth at the beginning of a connection for certain video providers but not all.” This means that several apps, like Netflix and Prime Video, will get a boost at the beginning of any stream. This bandwidth surge is shortlived, however, and once a certain number of bytes have been transferred the speed stalls. The study found that T-Mobile boosts Netflix, Prime Video, and NBC Sports in similar ways, while they fully throttle YouTube and ignore apps like Vimeo completely.

Ultimately, the study found rampant cases of net neutrality violations occurring across the board over the last year. Critics say that such practices create an uneven playing field for all video streaming options as well as video call apps. Findings indicate that “the openness and fairness properties that led to the Internet’s success are at risk in the US,” following the change in net neutrality rules. If something doesn’t change, things will only get worse.