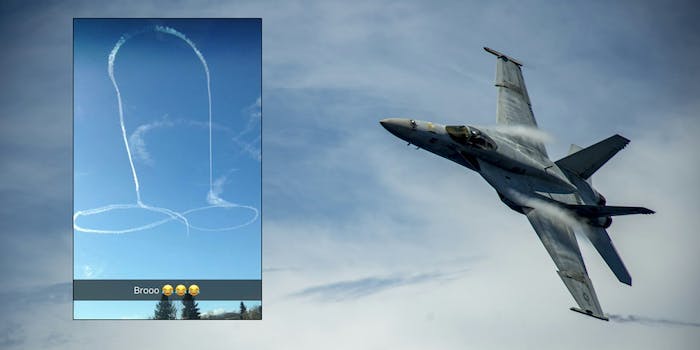 The United States Navy admitted on Friday that one of its aircraft was involved in drawing a penis-shape in the sky over Washington state, according to reports.

KREM2 reports that people spotted the skydrawings on Thursday and took photos of them. One resident told the news outlet she was upset she might have to explain to her children what the skydrawings depicted.

The plane drawing the penis apparently came from the Naval Air Station on Whidbey Island in Washington.

When contacted by the news outlet, the Navy said one of their planes was responsible for creating the male genitalia.

The most monumental thing to happen in omak. A penis in the sky pic.twitter.com/SM8k1tNYaj

“The Navy holds its aircrew to the highest standards and we find this absolutely unacceptable, of zero training value, and we are holding the crew accountable,” the Navy said in a statement.

The skydrawings did not pose a safety risk, the Federal Aviation Administration told KREM2, adding that they cannot “police morality.”