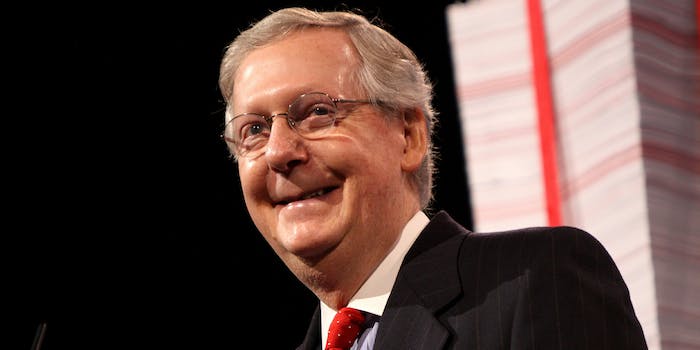 They took his leftovers, too.

Senate Majority Leader Mitch McConnell (R-Ky.) and his wife, Transportation Secretary Elaine Chao, were eating at a popular Cuban restaurant in Louisville, Ky. on Friday night when a protester confronted them, telling McConnell to “leave the entire country alone.”

Another patron at Havana Rumba took a video of the encounter, in which the person can be seen walking up to McConnell and Chao, who are sitting in a booth. The constituent tells other patrons, “They’re going to come for your Social Security!” The woman taking the video also yells, “Ditch Mitch” during the brief encounter.

The woman’s dining companion also mentions that a protester threw McConnell’s leftovers into the street, which the Courier-Journal confirmed. Earlier in the evening, another woman apparently confronted McConnell and Chao, as well, but left without incident.

Havana Rumba posted an apology on its Facebook page. “We deeply regret the incident that took place at our restaurant this weekend. We strongly believe everyone should feel welcome and safe in our restaurants,” the message reads. “Once we were aware of the situation we acted quickly and efficiently to assure that everyone was safe.”

A spokesperson for McConnell told the Courier-Journal that the senator and Chao, “hope other patrons weren’t too inconvenienced by left-wing tantrums” and they “appreciate those who spoke up against incivility.”

As the Courier-Journal notes, McConnell has had several run-ins with protesters recently, with people confronting  him in an airport and in D.C. and Kentucky, where protesters forced him out of a restaurant by playing Public Enemy’s “Fight the Power.” McConnell has repeatedly said that he’s not afraid of protesters.

Havana Rumba is a small chain owned by a Cuban immigrant, according to its website.

McConnell has consistently supported President Trump’s restrictive immigration policies and has failed to create a path to citizenship for people in the U.S. under the Deferred Action for Childhood Arrivals program.