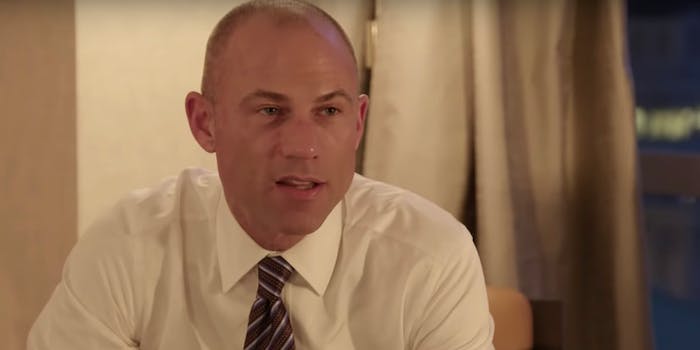 Michael Avenatti, the attorney who represented adult actress Stormy Daniels in lawsuits against President Donald Trump, was arrested in Los Angeles on Wednesday in connection with a report of domestic violence, according to TMZ.

BuzzFeed News reports that Avenatti was not yet booked but that Los Angeles police confirmed the arrest and that a report on the alleged incident was filed on Tuesday. Per TMZ, law enforcement sources said a woman filed a felony domestic violence report and previously identified the woman as Avenatti’s wife, Lisa Storie-Avenatti.

Storie-Avenatti’s attorney issued a statement to BuzzFeed News saying she was not involved in the incident or at Avenatti’s apartment at the time.

“My client states that there has never been domestic violence in her relationship with Michael and that she has never known Michael to be physically violent toward anyone,” the statement said.

Avenatti has expressed his desire to run for president in 2020 but reportedly told BuzzFeed News ahead of the midterm elections last week that he had “not made a decision” to run.

Update 7:34pm CT, Nov. 14: In a statement via his law office, Avenatti denied allegations of abuse or assault.

“I wish to thank the hard working men and woman of the LAPD for their professionalism they were only doing their jobs in light of the completely bogus allegations against me,” he said. “I have never been physically abusive in my life nor was I last night. Any accusations to the contrary are fabricated and meant to do harm to my reputation. I look forward to being fully exonerated.”

Los Angeles police told BuzzFeed News that Avenatti was booked Wednesday on a felony domestic violence charge and that the alleged incident took place at a home near Beverly Hills.

Update 7:55pm CT, Nov. 14: Avenatti was released Wednesday evening on $50,000 bail, BuzzFeed News reports. Speaking to reporters outside the police station, he reiterated his denial of the physical abuse allegations.

“I have never struck a woman. I never will strike a woman,” he said. “I am not going to be intimidated from stopping what I am doing.”

Following this arrest, the Vermont Democratic Party cancelled multiple events Avenatti was scheduled to attend this weekend. His court date is set for Dec. 5.