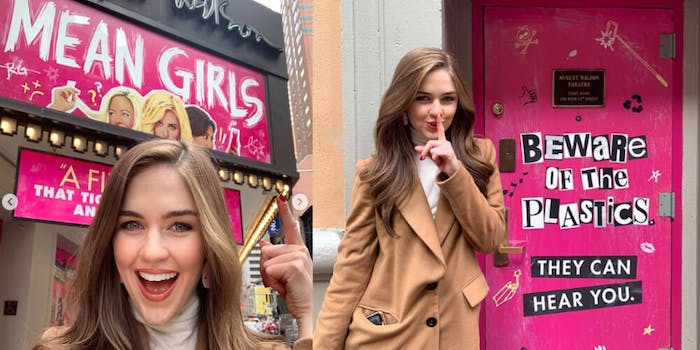 The actress set to portray Karen follows Candace Owens and Ben Shapiro, among other right-wing accounts.

Laura Leigh Turner, the actress set to play Karen Smith in the Mean Girls Broadway musical, is facing backlash over her Twitter activity.

Many fans of the movie were upset to discover this. Mean Girls has so far been celebrated as a feminist movie. Fans of Mean Girls and Broadway supporters alike felt casting a woman who may support political figures who are seen as sexist and homophobic was a slap in the face.

“I don’t want someone who supports homophobic, transphobic, racist people in this show,” Twitter user @bwaymaura wrote. “Also, someone who doesn’t support women’s rights in this show????? This is LITERALLY a show about female empowerment.”

Many did not take the casting decision lightly.

“In all seriousness, the casting for Karen is gross and completely goes against everything mean girls is about. i’m truly disappointed and disgusted,” Twitter user @micheIle_jones wrote.

But some came to Turner’s defense, saying she should be given a chance.

“Ik this isn’t a broadway account but attacking the new Karen in Mean Girls on broadway because of her political affiliations is DUMB. attacking LAURA OSNES (a queen) bc she’s maybe a republican is also DUMB bc she is educated and not a problem,” Twitter user @Singer_girl24 wrote.

Others just took the opportunity to joke about the controversy.

“Mean girls bway just casted a pro-life trump supporter to play karen but at least the character is supposed to be a dumbass,” Twitter user @idletovvn wrote.

So far, fans have not unearthed bigoted posts from Turner herself. Her Instagram is full of “empower women” posts and posts encouraging followers to trust in God.

Though she has not yet responded to criticism, she semi-recently retweeted a post saying “we are not our politics,” so that may indicate how she feels about the situation.

Turner is supposed to take on the role of Karen Smith beginning March 10, unless outrage from fans impacts this decision.