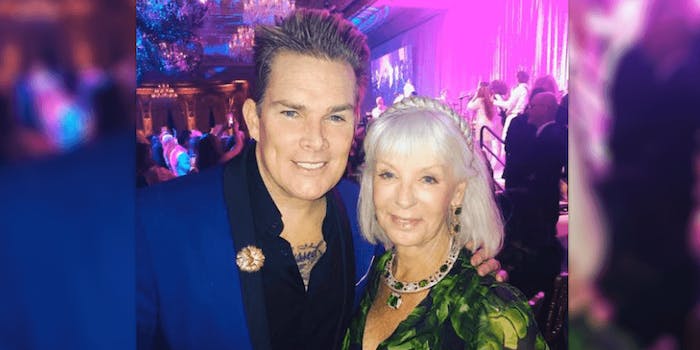 McGrath seemed to address the controversy after a photo of him at Trump's resort went viral.

A photograph began making the rounds on Twitter Thursday that alleged to show the songwriter at the Florida-based resort, which is owned by President Donald Trump.

[Mark McGrath at Mar-A-Lago on NYE]:

🎶 Every morning there’s a MAGA hat on the corner of my girlfriend’s four-post bed… Actually it’s mine but I’ll see if I can hide it so I don’t lose any more of my fans… 🎶 pic.twitter.com/3Z2SJqR3Kk

The picture quickly led to backlash among Sugar Ray fans, as well as the band’s detractors.

“How big of a douchebag would you have to be to spend New Year’s Eve at Mar-a-Lago?” Twitter user @zaharako asked. “Like Mark McGrath level.”

How big of a douchebag would you have to be to spend New Year's Eve at Mar-a-Lago? Like Mark McGrath level. #NewYears2020 pic.twitter.com/UTdT1oXDQv

Partying at Mar a Lago with Trump on New Year’s?? Dang. Thought you were a good one. What a disappointment. pic.twitter.com/8E1MTlQ0mS

Mark McGrath was only invited to Trump’s Mar-a-Lago party because The Spin Doctors, Blind Melon and Smash Mouth we’re all on tour.

The singer’s alleged appearance at the resort also produced numerous false claims, including that the woman in the photograph was actually McGrath’s new wife.

“Mark McGrath married someone who could literally be his grandma, and of all places shit hole resort Mar-A-Lago,” Twitter user @Mossimo77 said. “It’s gross.”

Mark McGrath married someone who could literally be his grandma, and of all places shit hole resort Mar-A-Lago. It’s gross.

What’s weirder; that Mark McGrath married his grandma at Mar A Lago.

Trump supporters, however, came to the frontman’s defense as the issue became a top political trend on Twitter.

“OK, I guess the libtards are mad because Mark McGrath attended a party at Mar-a-Lago,” Twitter user @notmyname02 said. “I don’t even know if this is true or something the libtards made up.”

OK, I guess the libtards are mad because Mark McGrath attended a party at Mar-a-Lago. I don't even know if this is true or something the libtards made up.

Mark McGrath got married at Mar-A-Lago, so according to the left that automatically makes him a racist, but Trump and conservatives are the divisive ones, not the people spouting hate at him. This is your modern #LiberalLogic #LiberalsAreMorons

Another reason Mark McGrath is awesome; aside from "Every Morning," "Answer the Phone," "Fly," & others…he just gave a massive middle finger to the left (that today probably would dub his music 'misogynist' or 'white privileged') by doing NYE at Mar-A-Lago

The image was first posted to Instagram late Tuesday evening by the daughter of the woman standing next to McGrath.

The Daily Dot reached out to McGrath for comment regarding the photo but did not receive a reply by publication time. Shortly after reaching out to McGrath, the musician released a statement on Twitter appearing to confirm that he indeed visited the resort.

McGrath’s attendance would be unsurprising given that the singer was scheduled to perform at the 2016 Republican National Convention, according to Fox News.

Speaking with the Hill in late 2016, McGrath stated that Trump’s actions on the campaign trail were different from those on the set of his reality show. The singer appeared on The Celebrity Apprentice 4 in 2011.

“You know, it’s funny. The rhetoric I saw him using during the campaign is not the Trump I knew, you know? He was always a gentleman; he was always kind,” McGrath said.

The singer also recently made headlines after an online comedian used McGrath to break up an imaginary couple with a video from Cameo.