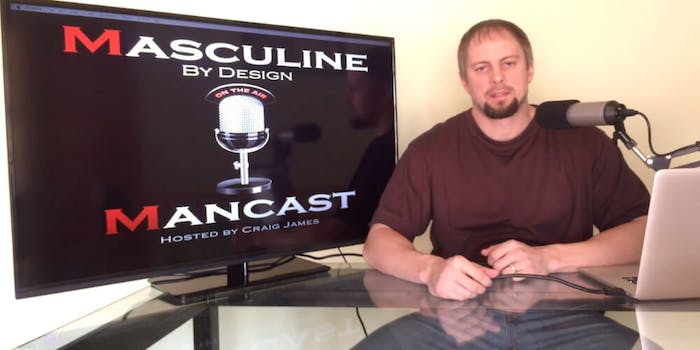 What's behind the rise of conservative podcasts for men?

This might seem redundant for anyone who has stepped foot on Twitter and encountered the warmed-over joke, “What do you call a group of white guys? A podcast.” But, just because the podcasting form has an abundance of men hasn’t stopped some guys from making podcasts all about being dudes.

gonna become a guy that just listens to podcasts that make you manly pic.twitter.com/XoFN594X1X

Anyone with a passing familiarity with online knows that Jordan Peterson has made a killing offering advice on manhood with a steady undercurrent of crypto-fascism to young men. Capitalism dictates that his success and the success of Joe Rogan, the fun, free-living uncle who plays alongside Peterson’s stern conservative father on many zoomer YouTube accounts, would breed more content about manhood.

Specifically, there is a preponderance of podcasts that aim to reclaim or entrench traditional concepts of masculinity. These podcasters are specifically talking about a conservative, nationalistic version of manhood that is anchored in the nuclear family, the Church, respect for the military, and adoration of the free market.

There’s Craig James‘ Masculine by Design Mancast, a socially conservative podcast that offers a mix of self-help, physical fitness, and Christian evangelism. James focuses on affirming and promoting traditional ideas of masculinity. For example, a recent podcast episode “The Ultimate Podcast Episode for Fathers” focused on the role of fatherhood from a conservative Christian perspective.

A recent question and answer episode “The Balanced Life, Repping Pull Ups and Opposing Faiths in the Home” hits firmly on James’ big themes, covering bodyweight pull-ups, the future of employment, and marrying someone with different religious beliefs than yourself.

A key quote from that episode situates James somewhere between Peterson and Dirty Jobs’ Mike Rowe, a fatherly or older brother figure to his listeners who preaches the gospel of personal accountability:

“If you are one of the many men that I see that go about your business at work, you do the status quo, you do the bare minimum to be a fly under the radar, you aren’t looking to build your skills, you aren’t looking to learn new skills, you aren’t willing to let your boss know that you want to be challenged… You are going to have a hard time. The world is changing at a really quick speed and you have to be able to adapt to that… You have to be doing things to make yourself into a well-rounded individual.”

Path to Manliness hosted by Ryan Felman takes a more explicitly anti-feminist approach in its Apple podcast logline: “Seeking masculinity in a feminized society. Self-improvement for men looking to better themselves.” For Felman, self-improvement is about self-control, avoiding the “distraction” of females, physical fitness, and looking to the stoicism of the classicists.

The first episode of the podcast, released in Spring 2019, titled “Reclaiming Masculinity” serves as a mission statement for the series. “Welcome to the Path to Manliness Podcast,” he says. “This is where men reclaim their lives. It is here we remind each other how to be men, to learn how to be gentlemen, to reclaim our manhood.”

While the introductory episode comes off as intense and even vitriolic at times—particularly in a short rant about Instagram models—a recent episode, “Chief Chuck on Honor, The Navy and Personal Finance” has a more relaxed vibe. Felman interviews a U.S. Navy officer pseudonymously known as Chief Chuck online. Chuck, 55, offers a mature perspective to 31-year-old Feldman’s audience.

The episode is an often sweet and thoughtful conversation about confronting failure and financial responsibility. Though the episode has moments of light misogyny, with lines like, “Here’s one my audience will like. By law if your wife decides to divorce you because she likes the pool boy more than you she can’t come after your 401K,” the tone is more tell-it-like-it-is “locker room talk” than far-right anger. For the most part, the episode sticks to common sense ideas like not buying a car you can’t afford and thinking about retirement in your twenties.

What are The 7 Pillars of Masculinity:

The Family Alpha is a podcast hosted by Hunter Drew, a “Married, Patriarch of 2 (a son and a daughter), Navy Veteran, and man on a mission to help my fellow men find purpose in their life.” Though it is a bit more explicitly political and right-wing than Masculine By Design, the approach and perspective are similar. Drew and James both post on a subscription-based men’s website called FraternityOfExcellence.com which offers monthly plans beginning at $64.99/month.

Though some episodes focus on Christian conservative takes on current events, a recent episode “Why You Need to Have a Hobby,” features educator Graeme Smith discussing his leatherwork hobby. In the episode, the hosts discuss the virtues of hobbies and valuing craftsmanship and attention to detail in your daily life. They suggest making choices like using a French press rather than a Keurig machine, something a left-wing magazine might suggest as well. Though there is a conservative undertone to the episode (particularly with regard to “family legacy”), it is no more right-wing than an episode of Last Man Standing.

I’m starting to think that

You want a stable life and kids?

Family men have nothing to apologize for, let them use the term as a negative, I say embrace it.

These are by no means the only three podcasts to offer a conservative perspective on masculinity. In fact, each of them has various colleagues and allies with their own podcasts who appear as frequent guests.

Though there is variation between these podcasts, there are similarities that unite them. They tend to consciously situate themselves to the left of the far-right or the conscious misogyny of something like Legion of Skanks. Either they are explicitly Christian or espouse a stoic atheism with reverence for the classics; regardless, self-control is a theme. The military, church, nuclear family, and free market are all honored and respected structures. Self-reliance, survival, and personal responsibility are common themes. Pulling yourself up by your bootstraps is a foundational command.

While it is a stretch to say these podcasts actively hate women, they are defined by their absence. Wives, girlfriends, and lovers are often presented as antagonists and are rarely, if ever, guests.

Where did this content come from? As traditional print media has been replaced by digital media, the doors have been opened to a multiplicity of more niche perspectives: How many socialist podcasts have sprung up since 2016? It’s not surprising that there has been an equal and opposite reaction on the right.

The Esquires, GQs, Playboys, and Maxims of the late 20th century accommodated liberals and conservatives alike, much as our neoliberal politics and culture did in America more broadly. The 21st century has brought about more progressive versions of some of these magazines while others have folded. While the new iterations of these men’s sites might be capitalist, they are at least diverse in terms of race and gender identity.

Newer men’s websites also skew progressive. Complex—first and foremost a hip-hop magazine—has emerged as a dominant tastemaker for young men. The site prominently features men of color as its subjects and on the masthead. (Disclosure: I have written for Complex.)

Mel magazine, a product of the Dollar Shave Club, has embraced progressive ideas both socially and economically. The site has a female editor-in-chief, publishes lots of work for and about LGBTQ men, and often challenges traditional ideas about masculinity. The site has risen to internet prominence as a vision of what a men’s publication can and should look like in 2020. A recent article was titled, “Why Do Men Fetishize Women Who Are Big Eaters?”

These podcasts, then, can be read as a reaction to this progressive movement among magazines and websites. Felman has said as much:

“If you’re like me you may have noticed that a lot of these typically male magazines and websites have abandoned their core philosophies and beliefs and have pursued more consumerist and feminized ideals. Playboy, for instance, seems to have died with Hugh Hefner… Rolling Stone is another one that is a shell of its former self… It’s completely biased… GQ wants men to start wearing makeup.”

There is a segment of the male population that is uninterested in admitting that the young right has lost the culture war. And these podcasts cater to just that audience. While this audience is not a majority of young men, it is a market that is being actively pursued.

Just because the world is changing, these podcasts tell their listeners, doesn’t mean you have to. As younger generations reject traditional concepts of manhood, these podcasters are trying to hang on to a specific, and in their view immutable, vision of masculinity, despite the changing world around them.

Funnily enough, Mel magazine and Path to Manliness actually agree on one thing completely: What it means to be a man depends on who you ask. Or rather, which podcast you listen to.