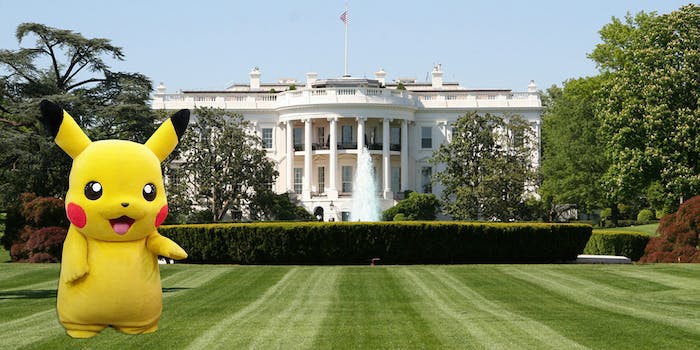 He wanted to be the very best—like no one ever was.

He wanted to be the very best–like no one ever was.

At infiltrating the White House.

A man dressed in a Pikachu costume was caught by Secret Service officers after he jumped a concrete barrier on the southern ground of the White House, CNN reports. Curtis Combs, 36, of Somerset, Kentucky, told police he wanted be famous and hoped to post a video of him in costume of the popular Pokémon on YouTube.

Combs told officers he was unarmed before climbing the fence as Pikachu, CNN reports, and ignored multiple commands to stop climbing. A backpack he has was investigated by bomb technicians and later cleared by police.

Combs was charged with unlawful entry and pleaded not guilty.

This is just the latest example of Pokémon and national politics mixing in recent weeks.

Pokémon Go, the mobile augmented reality game, was reportedly used by Russian actors during its multi-faceted attempts to disrupt the 2016 election.

The actors used a fake Black Lives Matter campaign in an attempt to get users of the game to find and train Pokémon near areas where alleged incidents of police brutality occurred and give the creatures names of victims of such incidents.