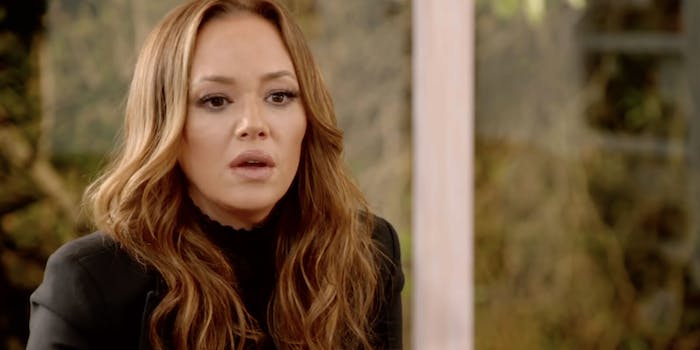 She says the administration is unnaturally close to the church.

Actress and former Scientologist Leah Remini said in a new interview with the Daily Beast that “Scientology hopes to take over our government.”

In the wide-ranging sit-down, the former King of Queens actress discussed circumstances around shelved episodes of her Emmy-winning series Leah Remini: Scientology and the Aftermath, a show built around her recovery and exposure of Scientology’s practices.

Remini say A&E shelved episodes, particularly one centered around actor and known Scientologist Danny Masterson, who was accused of rape by four women.

A&E reportedly shelved an episode of her show concerning Danny Masterson’s sexual assault allegations following an alleged Church-administered negative public relations campaign. However, the episode will see the light of day as part of a two-hour finale special airing tonight.

Four women accused Masterson, formerly of That 70s Show, of rape. The women filed a separate lawsuit on August 14 in Los Angeles Superior Court. The actor, the Church of Scientology, and church’s chief, David Miscavige are all listed on the complaint, accusing the church and Masterson of stalking, physical invasion of privacy, and a conspiracy to obstruct justice.

At the end of the interview, Remini informed there would be an oncoming “phase II” in her approach to taking down the church.

The series finale of Leah Remini: Scientology and the Aftermath, which was broadcast for three seasons, will air on A&E on August 26 at 8pm ET.