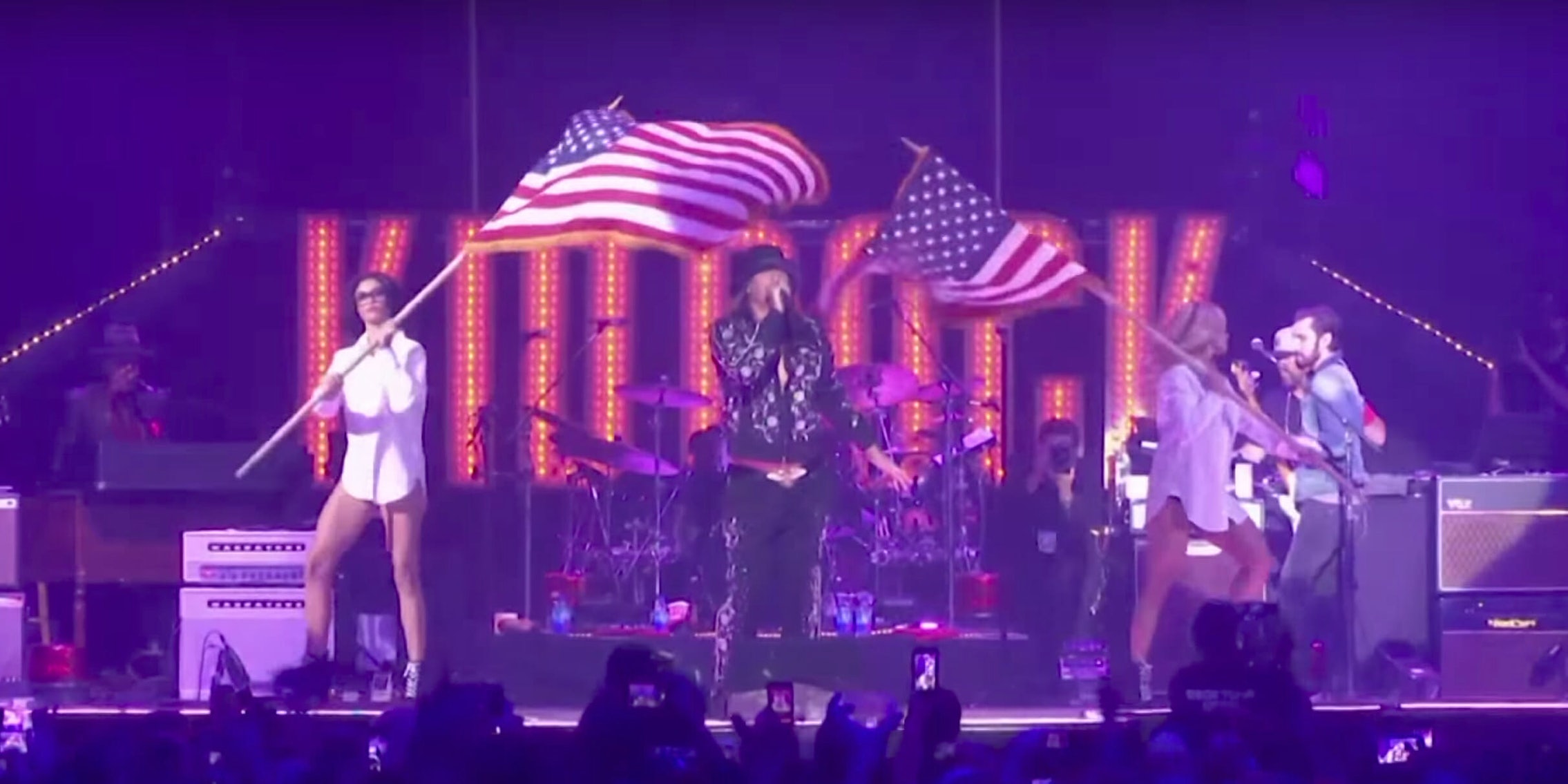 'Why, these days, is everything so gay?' asked the Senate hopeful.

As the National Action Network’s Detroit chapter protested outside, Kid Rock made another profanity-laden stump speech in Detroit at his concert Tuesday.

This time, the musician addressed gay rights and rehashing his views on racism and “deadbeat dads.”

“Why, these days, is everything so gay?” he asked the crowd midway through his speech (which sort of rhymed).

Immediately after voicing support for gay marriage (“I say let gay folks get married if they want to”), Kid Rock made clear that he does not support transgender rights.

“No you don’t get to choose because whatever you have between your legs should determine the bathroom that you use,” he said.

The musician, whose real name is Robert Ritchie, has not made an official announcement on whether he’s running for U.S. Senate, but he was welcomed to the stage as “the next senator of the great state of Michigan.”

He has been a loud supporter of President Donald Trump and launched a “Kid Rock for Senate” website earlier in the summer.

It’s also the second time in a week that Kid Rock has gone on a political rant in front of a crowd, even after a nonpartisan ethics organization filed a complaint against him for “failing to register his candidacy.”

Read the full text of the speech below, via Time.

And to be very frank, I really don’t have a problem with that, since God has blessed me and made my pockets fat. But redistribution of wealth seems more like their plan. And I don’t believe you should save, sacrifice, do things by the book and then have to take care of some deadbeat, milking the system, lazy a– motherf—ing man.

Now, the issue of struggling single parents is an issue close to my heart. But read my lips: We should not reward those who can’t even take care of themselves but keep having kid after f—ing kid. [Cheers]

Of course, of course we should help them out. I don’t want to stand here and sound like a jerk. But let’s help ’em out with child care, job training and find them a f—ing place to work. And you deadbeat dads, who refuse to be a man, who refuse to be there for their sons and raise them up to be good men. You no good derelict sperm donors wannabes. I say lock all you a–holes up and throw away the f–king keys.

And if you wanna take a knee and sit there during our Star Spangled Banner, call me a racist because I’m not PC and think you have to remind me that black lives matter. Nazis. F–king bigots. And now again the KKK? I say f–k all you racists. Stay the hell away.

And why, these days, is everything so gay? Gay rights, transgender this and that. I say let gay folks get married if they want to and I’m not even close to a deathtrap. But things shouldn’t be this complicated, and no you don’t get to choose because whatever you have between your legs should determine the bathroom that you use. [Cheers]

It’s no secret we’re divided and we all should take some blame, and we all should be ashamed because we all seem scared to call him by his name [pointing to a picture of Jesus]. So please, almighty Jesus, if you’re looking down on us tonight, please guide us with your wisdom and give us strength to fight. To fight the tyrant evils that lurk here and abroad and remind us all we are just one nation under God.

And I do believe it to be self evident, that we’re all created equal. I said it once, I’ll scream it again: I love black people. And I love white people, too. But neither as much as I love red, white and blue.

And if Kid Rock said it, it’s got some folks in disarray, wait ’til you hear Kid Rock for the President of the USA. Cause wouldn’t it be a sight to see, President Kid Rock in Washington DC. Standing on the desk in the Oval Office like a G. Holding my d–k ready to address the whole country.

I’d look them straight in the eyes, the eyes of the nation live on TV, and I’d say to them, ‘You ever met a motherf—er quite like me?’”