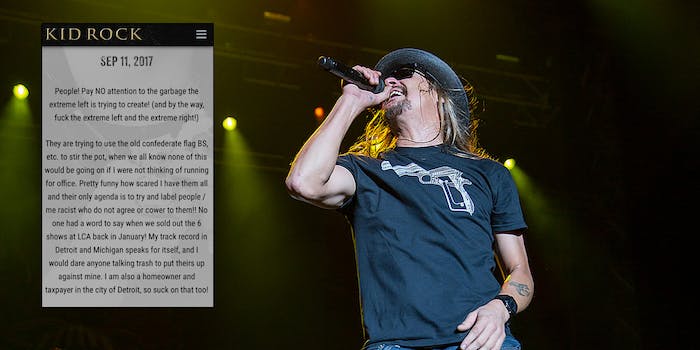 His stance about the Confederate flag might cause issues during his maybe-possibly-let's see run for Senate.

Bob Ritchie, better known as Kid Rock, said in a new blog post that the recent controversy surrounding his use of Confederate flags at his concerts was an attempt to “stir the pot” because he is “thinking of running for office.”

Richie came under fire from civil rights groups for being chosen to perform for the opening of a new arena in Detroit because of his past use of the Confederate flag during his shows, a symbol that has been the subject of rampant criticism in light of the violence that erupted in Charlottesville, Virginia, after white nationalists held a rally in the small college town.

The country-rap-rock singer blamed the criticism on the “extreme left.”

“I am the bonified KING OF DETROIT LOVE and it makes me smile down deep that you haters know that!” Richie wrote on his website. “Your jealousy is merely a reflection of disgust for your own failures and lack of positive ideas for our city.”

Richie has created rampant speculation about a possible run for the United States Senate ever since he said kidrockforsenate.com was real and he was gearing up for a “major announcement.”

Last week, Richie went on a profanity-laden political rant where he spoke out against athletes kneeling during the national anthem and “deadbeat dads.”

During his speech, which happened during a warm-up show for the ones he will be headlining in the new Detroit arena, he reportedly addressed the Senate-run rumors by saying: “If ‘Kid Rock for Senate’ has got folks in disarray, wait ’til they hear ‘Kid Rock for President of the U.S.A.!’”

Richie ended his blog post addressing the “extreme left” criticism by assuring everyone that he isn’t racist.