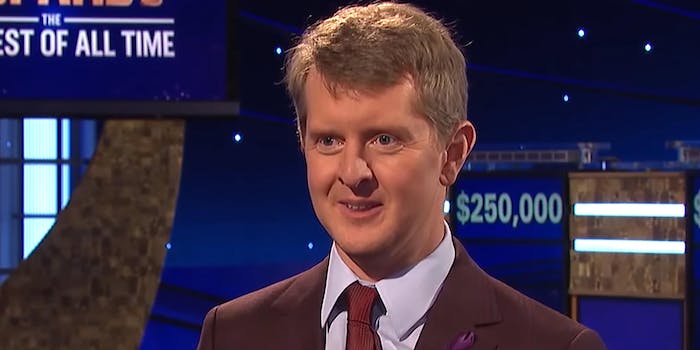 Ken Jennings' followed his Jeopardy win by throwing his support behind the Democratic primary's two most progressive candidates.

While the progressive wing of the Democratic Party took the gloves off during Tuesday’s debate, one of America’s greatest competitors called for left-wing unity.

During Mike Bloomberg’s social media’s swerve into Weird Twitter territory—which included an unnerving image of Bloomberg’s face on a meatball—@Mike2020 ventured a joke about the beloved Jeopardy champion. If a bit corny, the Bloomberg tweet was well-timed, as the trivia champ was just crowned the greatest Jeopardy player of all time.

Unfortunately for the Bloomberg campaign, they are far from the greatest Twitter users of all time. Jennings quickly hit back at Bloomberg, offering a duel endorsement for the most progressive members of the primary field, Sens. Bernie Sanders (I-Vt.) and Elizabeth Warren (D-Mass.).

“Remember, defending champion Ken Jennings wants you to vote for Bernie Sanders or Elizabeth Warren,” the champ wrote in a quote tweet.

Jennings has long been known for his solid Twitter usage and this was no exception. By Wednesday morning, he had racked up 57,800 favs and only 600 replies, about as impressive a ratio as you can have on the Hell site.

Though some tweeters in Jennings’ mention used the opportunity to reply “Bernie or Bust,” “Bernie is not a Democrat,” or “I’m ready for Liz” depending on their allegiances, many appreciated his attempt at left unity.

Ken, you nailed it exactly! And I want those two on the same ticket. This fighting between the #Bernie2020 and #Warren2020 is LUDICROUS. Warren and Bernie should have had a handshake. I was disappointed with Warren on that one, because Bernie did extend his hand.

Other than one avi-free user who demanded Jennings “not mix politics and @Jeopardy,” the comment was generally well-received.

Of course, like a Jeopardy tournament of champions, the primary can only have one winner. But, in this tweet at least, the greatest Jeopardy player of all time secured himself yet another win.