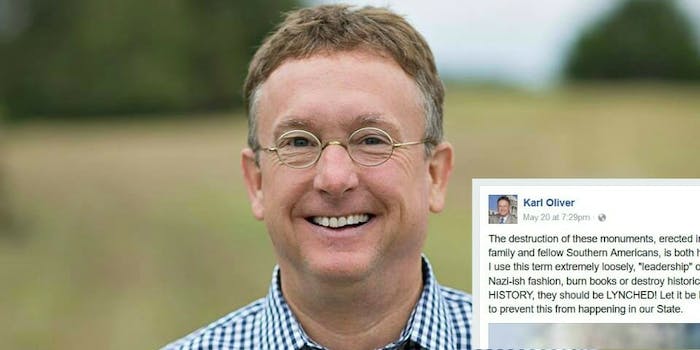 Rep. Karl Oliver said those who want to remove the statues are acting 'Nazi-ish.'

The city of New Orleans has spent the past few weeks uprooting and moving Confederate monuments, including statues of Gen. Robert E. Lee and Jefferson Davis, out of sight. If Mississippi state Rep. Karl Oliver has his way, though, that will never happen in the Magnolia State.

And if you believe he’s wrong, he thinks you should pay a high price.

Oliver, a Republican, wrote in a Facebook post on Friday that Louisiana was acting in “a Nazi-ish fashion” and that if anybody wanted to do the same in Mississippi, they “should be LYNCHED!”

As Mississippi Today points out, Oliver represents the community of Money, Mississippi—where 14-year-old Emmett Till was lynched in 1955 for allegedly whistling at a white woman.

Rep. Sonya Williams-Barnes, a Democrat from Gulfport and the head of the Legislative Black Caucus, condemned Oliver’s “shameful” statement as offensive to African-Americans.

“The shameful, but seemingly extremely comfortable, choice of words used by my colleague Rep. Karl Oliver, were offensive to me as the act of lynching was commonly used and most targeted toward African-American men, women, and children in the South and especially in our state,” she said.

The New Orleans statue removal has been a topic filled with controversy. Progressives want to remove monuments they believe harken back to a time when racism and slavery was a large part of the country’s fiber. Conservatives think the city is simply erasing an important part of America’s history and culture.

In fact, New Orleans’s decision has been so controversial that city workers and officials who removed the monuments received death threats and had to wear military helmets and bulletproof vests.

The Monumental Task Committee disagreed with the monuments’ uprooting, saying, “Mayor [Mitch] Landrieu and the City Council have stripped New Orleans of nationally recognized historic landmarks. With the removal of four of our century-plus aged landmarks, at 299 years old, New Orleans now heads into our Tricentennial more divided and less historic.”

Though Mississippi lawmakers didn’t respond to Oliver’s Facebook post for the first two days it was online, Republican House Speaker Philip Gunn posted this to Facebook on Monday.

“I condemn the comments recently posted on Facebook by Rep. Karl Oliver. They do not reflect the views of the Republican…