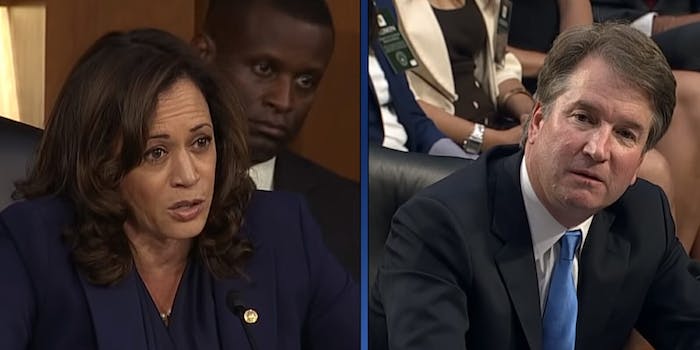 There was some serious tension late last night.

Sen. Kamala Harris (D-Calif.) grilled Supreme Court nominee Brett Kavanaugh on Wednesday, probing him about discussions he may have had regarding the investigation by Special Counsel Robert Mueller and his views on abortion.

Harris, an oft-rumored potential 2020 Democratic presidential candidate, came out swinging as soon as her line of questioning began late Wednesday.

“Judge, have you ever discussed Special Counsel Mueller or his investigation with anyone?” she asked.

After a brief pause, Kavanaugh answered that the probe—which may focus on President Donald Trump‘s campaign and possible obstruction of justice—was “in the news everyday.”

The Democratic senator continued to push Kavanaugh for an answer.

“Have you discussed Mueller or his investigation with anyone at Kasowitz, Benson & Torres, the law firm founded by Marc Kasowitz, President Trump’s personal lawyer?” she asked, adding that he should be “sure” about his answer.

The Supreme Court nominee appeared confused by the question.

“Is there a person you’re talking about?” he asked.

After a back-and-forth, the nominee again asked if the senator was asking about a specific person, prompting a reply.

“I think you’re thinking of someone and you don’t want to tell us,” she said.

Almost immediately Sen. Mike Lee (R-Utah) tried to jump to Kavanaugh’s defense, arguing that there Washington D.C. is “full of law firms” that are “full of people.” He argued that Kavanaugh couldn’t know “who populates an entire firm.”

Sen. Harris: "I think you're thinking of someone and you don't want to tell us." #KavanaughHearings pic.twitter.com/Mgjq7myWxp

Kavanuagh said he talked to “fellow judges” about Mueller’s investigation, but said he couldn’t answer Harris’ question about speaking with people at Kasowitz, Benson & Torres because he didn’t know everyone who worked at the law firm.

The Mueller question wasn’t the only issue Harris pushed the nominee on.

When discussing Roe v. Wade, the Supreme Court case that legalized abortion rights, the senator asked Kavanaugh if he could think of “any laws” that allowed the government to “make decisions about the male body.”

🔥🔥🔥 — Sen. Harris to Judge Kavanaugh: “Can you think of any laws that give government the power to make decisions about the male body?" pic.twitter.com/xjplVWORfI

“I’m not thinking of any now, senator,” he responded.

You can watch the entire exchange regarding Harris’ Mueller question here.