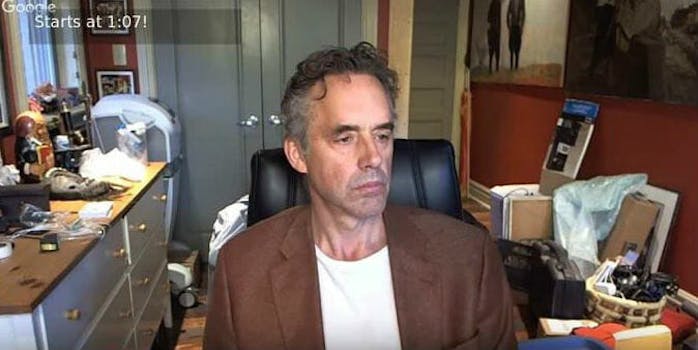 Jordan Peterson of ‘Clean up your room!’ fame can’t clean his room, apparently

Twitter is roasting the 'alt-right' hero for not living up to his own standards.

If you’re unfamiliar with internet pseudo-intellectual Jordan Peterson, maybe consider yourself lucky. After an interview with Channel 4’s Cathy Newman about a piece of Canadian legislation that sought to add “gender identity and expression” to laws regarding discrimination, Peterson was hailed as a hero of “alt-right” ideals, causing the video to go viral and launching the psychology professor to internet stardom.

Since then, Peterson’s reputation has ebbed and flowed as much as any other viral celebrity. Like most internet trends, though, his seems to be ending with a comedic meme, this time focused on his relatively messy home.

jordan peterson: "A rule for your life: clean your room. It will help you combat the chaos of the universe."

The joke lands because Peterson himself has a long history of telling his audience to use the act of cleaning their room as a starting point for finding peace and safety amongst the chaos of life. Don’t believe me? Here’s Peterson devoting five whole minutes to the subject.

And Peterson’s own book, 12 Rules for Life: An Antidote for Chaos, which mixes ideas on masculinity and individualism in a self-help format, tells readers to “set your house in perfect order before you criticize the world.”

So you see, when waves of young internet-dwellers stumble upon Peterson’s philosophic ramblings searching for guidance and meaning, one can hardly get angry with the man for telling people to clean their rooms.

They can, however, mock the man for completely failing to live by his own standards.

It's okay if your room isn't clean, because you're not making thousands of dollars every month on patreon from telling people to clean their rooms

“Peterson speaks to disaffected millennial men, validating their prejudices about feminists and serving as a surrogate father figure. Yet he’s offering them terrible advice, because the ‘individual responsibility’ ethic makes one feel like a failure for failing… Millennials struggle in part because of a viciously competitive economy that is crushing them with debt and a lack of opportunity…But if you can’t pay your student loans, or your rent, and you can’t get a better job, what use is it to tell you that you should adopt a confident lobster-posture?”

Well, at least his level of cleanliness is in direct correlation to his masculinity: a toxic mess.