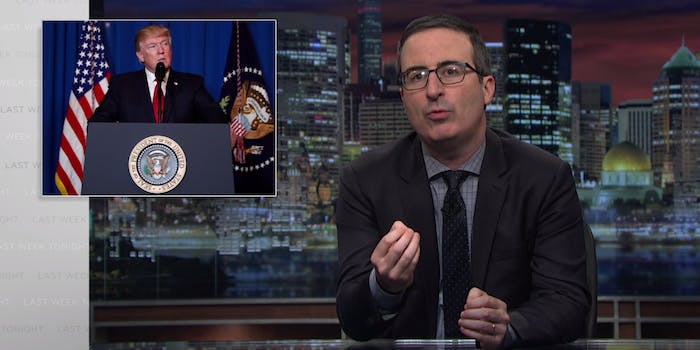 John Oliver is not excited about the praise Donald Trump is receiving from the media for his actions in Syria.

John Oliver opened Last Week Tonight by trying to wrap his head around Donald Trump’s airstrike on Syria, which came in response to a chemical attack from Syrian dictator Bashar al-Assad. He also covered what could happen next.

While Oliver didn’t have the answer to whether Trump made the right move, he had some thoughts on what came out in the hours after the attack. He critiqued some members of the press, particularly MSNBC’s Brian Williams, for his practically “orgasmic” response to the airstrike. Oliver also noted how the strike drove some of Trump’s critics to praise him while supporters were less than thrilled about the move. And for like pretty much everything else Trump does, Oliver showed a bunch of contradictory tweets about Syria in his archive .

It’s a lot to unpack.

Oliver also has some questions about Trump’s ultimate goal with the airstrike—and what that means in the context of Trump, who just got the praise he craves from the establishment.

“This is complicated, and I’m not saying there are right answers here,” Oliver said. “I’m saying there needs to be a tangible strategy acknowledging how difficult taking on Assad actually is, because right now, we have a president who feeds off praise, and he just got a lot of it for bombing someone. And that should make everyone very, very worried.”