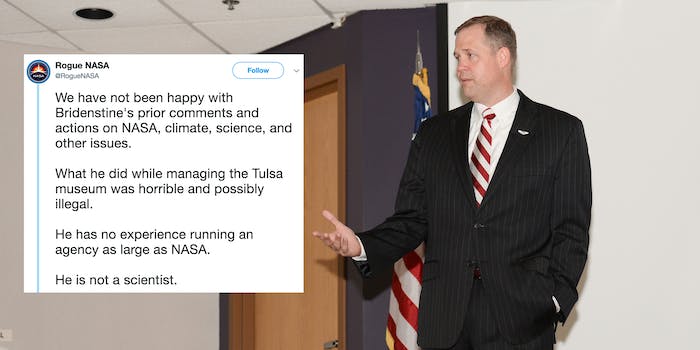 'Maybe nothing will happen. We hope.'

The U.S. Senate confirmed Jim Bridenstine, a Republican Congressmen from Oklahoma, to be the next administrator of NASA on Thursday—and the Rogue NASA Twitter account wants you to know it’s a terrible decision.

The administrator serves as the senior space science adviser to President Donald Trump. According to NASA, the role of the Administrator is to “lead the NASA team and manage its resources to advance the Vision for Space Exploration.”

A former Navy pilot who once ran the Air and Space Museum in Tulsa, Bridenstine also sits on the House Committee that oversees NASA. But he has never worked for NASA—a typical trait that past administrators have had—and he’s not a scientist. Many NASA advocates are concerned about the fact that Bridenstine doesn’t seem to totally believe in climate change, and now he manages an organization that holds the most comprehensive data on climate change in the world. And some critics are skeptical about the fact that he’s the first member of Congress to hold the administrator job.

These are just some of the points the Rogue NASA Twitter has brought up in a series of tweets that criticize Trump’s appointment. And while readers on Twitter should always be skeptical about the authenticity of rogue Twitter accounts, Snopes has reason to believe that this account is real.

We have not been happy with Bridenstine's prior comments and actions on NASA, climate, science, and other issues.

What he did while managing the Tulsa museum was horrible and possibly illegal.

He has no experience running an agency as large as NASA.

He is not a scientist.

If we get any direction to stop or censor our science – climate or otherwise – we will let you know.

In the meantime keep an eye on:https://t.co/JM4jdwyuBe

Maybe nothing will happen. We hope.

The small non-profit was an Air and Space museum. THE IRONY. 😡 https://t.co/nawjUCQCrh

Oh yeah tell him, NASA Goddard….tell him about all the wonderful Earth science you do because it's a lot and it's amazing. https://t.co/hvIopJOBkP

To put things in perspective, Bridenstine has no science or engineering degree.

The one before him had degrees in physics, aerospace science,
aerospace, electrical, and civil engineering, and applied physics.

Those behind Rogue NASA aren’t the only ones to come out as openly critical of the appointment. Even members of the Republican party, such as Sen. Marco Rubio (R-Florida), voiced opposition to Bridenstine initially, according to Vox.

NASA is “the one federal mission which has largely been free of politics,” Rubio said in September. “I just think it could be devastating for the space program.”

In the end, however, Rubio and his Senate colleague voted in favor of the appointment. The final vote was 50-49 in favor of confirmation.