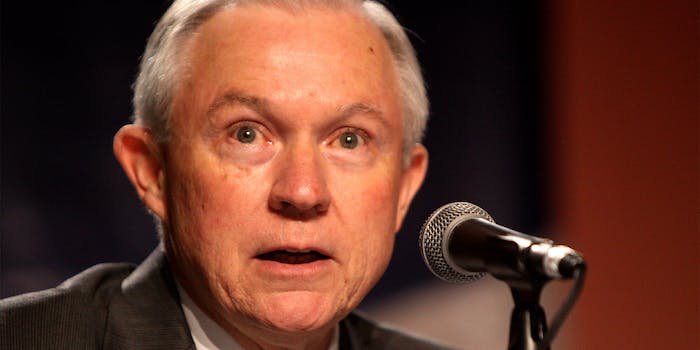 Everyone is frightened by Jeff Sessions’ visage on Time magazine

For a large segment of the American populace, Jeff Sessions has been the avatar of evil in the Trump administration. From being the public face of ending DACA to amping up the War on Drugs, no one has been so publicly supportive of Trump’s “law and order” agenda, which critics say disproportionally targets people of color.

What did Time think was gonna happen here?

I could have sworn Kylo killed Snoke https://t.co/pWjbHvyX7t

#JeffSessions, appropriately evil and creepy on the cover of @TIME… looking a bit like he wants my liver with some fava beans… https://t.co/bl8t2p5P3t

the power of christ compels you https://t.co/UOuCa00Auh

I thought this was a trailer for new horror movie 😱 😂 https://t.co/l7rhQj9t63

This photo will haunt my dreams forever.

Also, while Sessions can say “Nobody’s above the law” in an interview, it’s very clear from his tenure that … certain people are above the law.