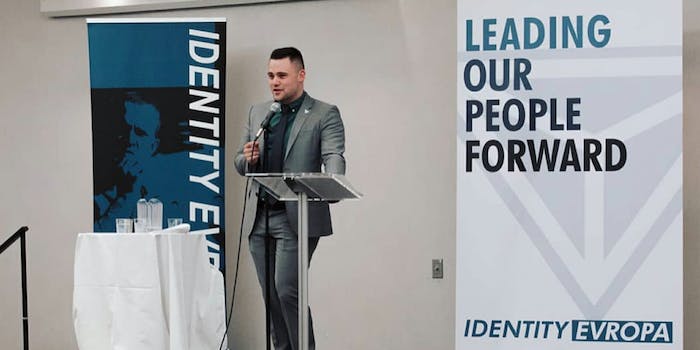 The 'alt-right,' anti-immigrant protester will be in charge of voter registration.

James Allsup, a member of one of the “pro-white” groups that marched in Charlottesville, Virginia, last year, was elected to a Republican Party post in Washington state last week.

The 22-year-old attended the “Unite the Right” protest—where a white supremacist drove a car into a crowd and killed one protester—with Identity Evropa, an anti-immigrant “alt-right” organization, according to the Daily Beast.

Now, Allsup has been elected as precinct committee officer for the Republican Party in Whitman County, Washington—and he has the certificate to prove it. He posted a photo of the document on Facebook (and the Daily Beast confirmed its authenticity with a Whitman County auditor). Turns out all he needed to secure the post was for his candidacy to be uncontested for four days.

His Instagram, which has over 6,000 followers, includes photos of him protesting and participating as a member of Identity Evropa.

Allsup said on a podcast by Identity Evropa that other members of the far-right should get involved in mainstream conservative politics, as well.

“I happen to be involved in the Spokane GOP. I am now actually an elected official in the Whitman County GOP down here where I live,” Allsup said. “You have a seat at the table. And that’s the most important thing, getting that seat at the table, and you can get that seat at the table by, yes, showing up, yes, by bringing people in, and again this doesn’t necessarily only have to be IE members.”

Editor’s note: This article has been revised to remove similarities to the Daily Beast’s original report.