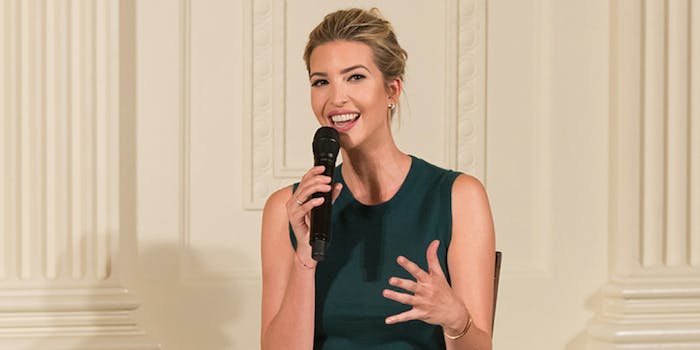 People are enraged by her obtuseness.

On Sunday, Ivanka Trump posted to Twitter a cute photo of her hugging her son.

But in the current climate, with reports of Immigration and Customs Enforcement (ICE) officials ripping immigrant children from the arms of their parents to separate them indefinitely—and in 1,500 cases, to actually lose the children—the presidential daughter’s Twitter post was savaged immediately for being unfathomably tone-deaf.

And the reactions rolled in.

Isn't it the just the best to snuggle your little one — knowing exactly where they are, safe in your arms? It's the best. The BEST. Right, Ivanka? Right? https://t.co/X79r8aWInc

Hey Marie Antoinette….you are just as dumb as your brother @DonaldJTrumpJr aren't you? pic.twitter.com/0Uj3CnKQfB

Lucky you get to spend a Sunday with your child… BUT #WhereAreTheMissingChildren ????

Imagine the horror that in your most desperate moment:
•Armed men strip him from you as he cries
•Don’t tell you where they’re taking him
•Lose him to human traffickers

No parent should ever suffer that. Stop the US policy enforcing it.#WhereAreTheChildren https://t.co/aQUlea5HxL

There’s something so sinister and cruel about the timing of her post. #WhereAreTheChidlren @FindThe1500

How sweet. You actually get to hold your baby as he wasn't snatched from your arms and then lost by your father's policies.