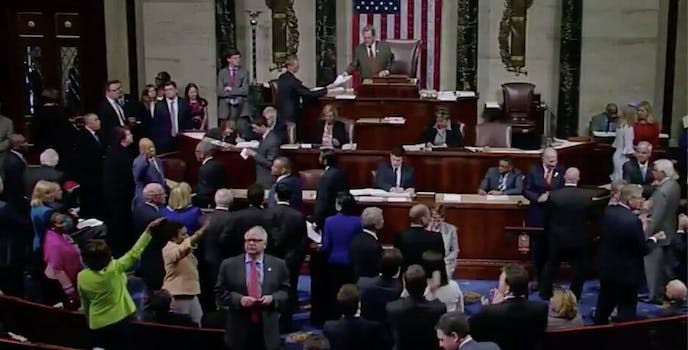 After the House GOP’s Affordable Care Act replacement, the American Healthcare Act (AHCA), passed Thursday by a slim 217-213 margin, the Democrats who unanimously opposed it were jubilant. Although they’d previously framed the healthcare fight as a matter of life and death, they celebrated by singing “Na Na, Hey Hey, Goodbye” to House Republicans, confident that the GOP members who voted yes would lose their seats for trying to take away voters’ health insurance.

The AHCA is incredibly unpopular, with somewhere between 17 and 37 percent of Americans in support of the bill, according to recent polls. But that doesn’t seem to worry Republicans, who celebrated with cases of beer at the White House after passing what many analysts say would be a major tax cut for the wealthy.

Senate Republicans will reportedly decline to consider the AHCA, opting to put forth their own healthcare bill rather than handling the hot potato they just received from their House counterparts.

Still, the House Democrats are being criticized on social media for the poor optics of seeming to celebrate a serious defeat on a very risky bill.

"We're not mad your murder bill is being sent to the Senate despite our opposition. We think it's funny, actually." —House Dems, apparently

House minority leader Nancy Pelosi (D-Calif.) was unapologetic about the performance, claiming the song was just something that spontaneously happened.

Will she still be grinning after the Senate is done with its ACA replacement?